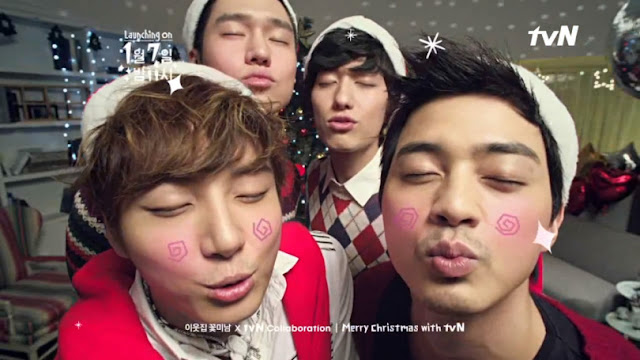 Guess what inspired me to start this blog?

No, it wasn’t all the amazing Korean dramas I stumbled across during the first few months of my addiction (although that helped).

It was actually the Dramabeans year end recaps for 2011, which drove me wild with envy. To have seen so many dramas! To write so authoritatively about them! To recognize actors by name, and excel at playing six degrees of Park Shi Hoo! When I read those articles, I saw unicorns and rainbows.

And now here I am, having posted on this blog at least twice a week for the past 52 weeks. In the meanwhile, I’ve watched an obscene number of dramas—new and old, good and bad—and can recognize, name, and outline the relative merits of practically every handsome young actor working in Korea today. (Next year, I’ll work on the old and ugly. Or not.) I know what I like (realistic romantic comedies with a heavy dose of melodrama), what I dislike (whimpering, useless female leads; talking heads vying for political power in funny hats), and what I want to see more of (hot kissing; see above).

Last year, I itched to write an informed year-end overview of Korean drama like the ones I read on Dramabeans. Now that 2013 has finally rolled around, I’ve read lots of great-year end posts on other blogs. But somehow I find myself without all that much to say that I haven’t already posted.

The root of this problem recently occurred to me: the reviews I’ve been posting every Thursday for the past few months have actually been my year-end review. Unlike a lot of other Kdrama bloggers, I don’t write recaps or spend a lot of time on in-depth discussions of the shows I watch. Instead, that kind of all-out treatment is saved for the few dramas I really love (or hate), while the ones I feel less strongly about receive only a brief review. These Thursday reviews are essentially what everyone else posts at the end of the year: short overviews of why I think you should (or shouldn’t) watch a drama.

So instead of creating something new for this requisite year-end summary, I thought I’d create a little index of the (embarrassingly many) 2012 dramas I watched this year. It has been fun going through the old reviews and seeing how my approach to writing them has changed, but in retrospect I still agree with most of my conclusions. (Next year I’ll work on this grade inflation problem I seem to have. Or not.)

I’m still too new to Korean television to really have a feel for whether specific years really have their own identity, as far as dramas go. The sheer number of programs that air ensures a huge variety of content and execution. And while these shows might be chock full of common themes, their presentation is always utterly unique; they might be built from the same raw material, but the results are always unexpected. (Not entirely like all those year-end drama reviews out there.)

So here I give you a speedy guide to 365 days of Outside Seoul--the dramas, the fangirling, and the snark.

Grade A
Answer Me, 1997. “As far as I’m concerned, [this] is the drama of the year, and quite possibly my second favorite Korean series of all time. It has everything you could ask for in a television show about growing up: it’s at once silly, funny, sweet, tender, and poignant.” A+

Arang and the Magistrate. “A perfect, goose-bumpy fit for the Halloween season, this show is just what I wanted it to be: a transporting sageuk that never commits the crime of taking itself too seriously.” A-

Nice Guy “Nice Guy is one of the finest examples of its species: dark and drawn to the things that break us, it explores the horrible things people will do to save themselves, and the precarious ways they can earn redemption for them.” A-

Padam Padam. “From its basis in a standard Kdrama conflict shared by who knows how many other shows, Padam Padam grows into a romance, mystery, family drama, and tale of both the natural and the supernatural. And television doesn’t get much better than that.” A

Queen In-hyun’s Man. “This is an epic, redeeming love story with a supernatural twist, beautifully plotted with unrelenting narrative tension and an unerring feel for the pleasures and terrors of star-crossed love.” A-

Shut Up: Flower Boy Band. “SUFBB transcends its gimmicky premise (pretty boys! In a band!) to become a genuinely affecting, well-made drama about the power of friendship and the pain of growing up.” A

Werewolf Boy. “A Werewolf Boy [is] an old-fashioned monster movie that knows the truth—the real abomination isn’t the mysterious, super-strong boy with no blood type and a body temperature of 115 degrees. Instead, it’s the society that reacts to someone who’s different with fear and cruelty.” A- (movie)


Grade B
Equator Man. “Thanks to a compelling cast and serviceable (if holy) plot filled with books, art, and a moving bromance gone terribly, terribly wrong, this drama is a juicy, uncomplicated soap opera that’s just right for rainy day viewing.” B

Faith. “It’s possible to enjoy this show for its swoony, slow-boil romance, but the second you give your brain cells free reign everything falls to pieces.” B-

I Need Romance 2012. “While the three C’s of the 2012 edition—cast, characters, and chemistry—aren’t quite on par with the wonderful original, all is forgiven in light of INR 2012’s better-plotted script and tendency toward dialog that’s equal parts painfully funny and painfully truthful.” B

King 2 Hearts. “An amusing drama with a likable cast and lots of fun mythology about the Korean monarchy in the twenty-first century, but tonally inconsistent and about 6 episodes too long.” B-

To the Beautiful You. “Flawed as it may be, this empty-calorie treat is light, bright, and full of sly references to the cross-dressing Kdramas that came before it. Watching it may barely require consciousness, but that doesn’t mean it’s not worth your time if you—like me—are happy to overlook some serious missed opportunities in favor of goofy fun.” B

Whatcha Wearin’. “This is a modern take on the age-old story of girl-meets-boy that takes a refreshingly graphic approach to sex and love. (And happens to be obsessed with underwear.)” B (movie)

What’s Up. “On a small-scale level, this show is full of idiosyncratic pleasures—fun musical numbers, interesting characters, and a random ghost for good measure (and occasional purposes of exposition).... But What’s Up’s ending-fail retroactively ruined what had been a fun show.” B-


Grade C
I Do, I Do. “If only this show had embraced its true premise rather than watering it down with standard Kdrama workplace shenanigans, it might have been the a touching story of an independent woman rising to the challenges of unexpected motherhood. As it is, I Do, I Do is an empty exercise in form over function that has neither a heart nor a soul.”  C

Fermentation Family. “What began as a story of foodie magical realism told through the lens of a traditional Korean restaurant and the people who frequent it quickly descended into a series of makjang plot twists taken right out of the Big Book of Kdrama Clichés.”  C+

The Thousandth Man. “Episodic and insubstantial, The Thousandth Man brings the mythical gumiho into the modern urban world, surrounding its family of foxes with spas and playgrounds and the petty concerns of humans.”  C+

Twelve Men in a Year. “All too often the show’s boundary-breaking central plot and great supporting cast are downplayed in favor of the abrasive, unlikable female lead and her cold-as-ice relationship with her ex-boyfriend.” C+

Grade D
Big. “Decently executed but with an unforgivably awful, unfocussed script: Once it became clear that the writers had no idea where they were going with the show’s central body-swap mystery, I all but lost the will to watch.” D


Dropped
A Gentleman’s Dignity. “As I sometimes do, I decided to start fast-forwarding through the boring parts at about episode 7. When I realized I’d skipped through the first 45 minutes of the episode without finding a single scene I actually wanted to watch, it became clear that it was time to call it quits.”

Will Get around to Someday (or not)
Gaksital
Love Rain
Posted by Amanda at 9:00 AM