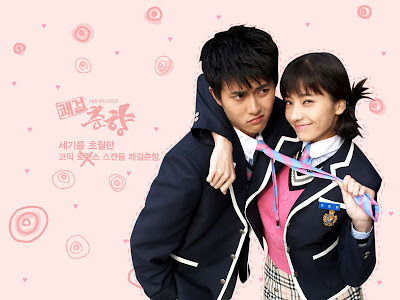 What it’s about
A traditional Korean folktale updated and reimagined for the modern world, Delightful Girl Choon Hyang starts out with a high-school contract marriage and follows its leads from friends to lovers as they mature into adulthood, fighting to stay together in spite of the manipulations of jealous outsiders.

First impression
Visually clever and fast-paced, this is one of the funnest first episodes I’ve seen in a while.

Final verdict
This is far and away the best drama written by the Hong sisters—not that that’s saying so much with the train wreck that was this summer’s Big still so fresh in our minds. Instead of over-the-top, disjointed, and cartoony like most of their recent work, Delightful Girl is the perfect combination of laughs and heart with a healthy dose of the real world thrown in for good measure.

These days many dramas suffer from being concepts, not stories. They roll along, filling time with manufactured conflicts to avoid moving beyond the show’s central premise—A body swap! An older woman is knocked up by a younger man! A Joseon prince and his color-coded entourage time travel to modern Seoul! For the sake of these marketing hooks, the idea of telling a compelling story with forward motion is utterly abandoned, leaving the drama paralyzed in one situation from beginning to end.

In contrast, Delightful Girl Choon Hyang tells a single story with a beginning, a middle, and an end. Time passes, circumstances change, and its lovable cast of characters mature and evolve, just like real human beings. It's funny and charming and irreverent, and delivered in the slightly skewed, high-energy voice the Hong sisters are known for--complete with unforgettable characters, goofy spoofs of other shows, and a lead couple that bickers their way to love.

Instead of flailing around for cheap laughs, Delightful Girl feels tightly woven and carefully wrought, with all its little details arranged for a greater purpose. Even the whimsical sageuk scenes at the end of each episode aren’t the throwaways they may seem at first—they offer a more faithful version of the original folktale, and are eventually incorporated into the main thread of the show’s plot.

My only gripe is that the late-arriving character change for the second male lead felt a bit out of the blue. It might have been faithful to the original story, but that doesn't make the writers less responsible for making the development work with their version. More insight into the hows and whys of his character would have both solved the problem and improved the show, ultimately making it even more humane.

The fact that the Hong sisters created a drama this well-thought out and lavishly imagined makes me wonder if they should give up writing original screenplays and insted focus on adapting other people’s work. If the result is always a must-see drama like this one—a show that feels both intimate and vast, funny and true—we’d all be better off in the end.

Random thoughts
• Episode 1. Is the skirt of that school uniform actually longer than 3 inches? And is the female lead’s hair really black? Boy, this show really is a blast from the past.

• Episode 1. I guess the Hong sisters are fans of L. M. Montgomery, because this is exactly what happened to Anne and Diana Berry. Maybe in the next episode Choon Hyang will have to cure his sister Minnie May of the croup?

• Episode 2. The fact that so many of the actors from Big are also in Delightful Girl is sweetening my memories of that hot mess—in retrospect, the time spent on the school administration is charming instead of a distraction. Also, Uhm Tae Woong must be responsible for like 80 percent of global warming, he’s so smoking hot in this show.

• Episode 2. Holy Park Shi Hoo! I clearly need to read the Dramawiki cast lists before I start watching new shows, because Park Shi Hoo popping out of nowhere for a five second cameo just gave me a serious case of the vapors.

• Episode 4. Where is it written that marriage ceremonies conducted by a bunch of students in a high school gym are legally binding? This whole wedding thing is just an excuse to let teenaged protagonists live together. (Not that I’m complaining, mind you.)

• Episode 5. Just what every new driver needs—a giant sign reading “new driver” on the rear window to totally block the view of the road behind them. Great thinking, Choon Hyang!

• Episode 5. Speaking of common drama locations, this ski resort was definitely home to at least two of the Endless Love dramas, and possibly Prosecutor Princess, too.

• Episode 8. On the bright side, if the second female lead ever unexpectedly fell into a body of water—as Kdrama characters are wont to do—she would drown for sure with all that ugly jewelry weighing her down.

• Episode 10. Re-enactment of the aquarium scene from Baz Lurhmann’s wonderful Romeo and Juliet? You know what that gets you, show? An automatic A+, that’s what.

• Episode 11. Is it crass to mention that I wish Han Chae Young would go down a cup size? That matronly shelf of a bosom looks utterly unnatural on her tiny frame, and I keep waiting for her to tip over because her giant ta-tas put her so off balance. Also, they have to dress her carefully or she looks like the mother of the bride, ala her formal wear in Boys over Flowers.

• Episode 11. I hereby decree that all Kdramas should be retroactively rewritten to star Choon Hyang. She’s smart, creative, insightful, and as low-maintenance as can be. The girl just made her boyfriend get a refund for some cut flowers he bought her, because what's a bigger waste of money than something that dies within a week? Today’s Kdramas could use more than a little of her can-do, Eun-chan-esque tomboy charm.

• Episode 15. So this is fairly off-topic, but no matter how incredibly off-the-charts excited you are when your box of Asian paper facial masks arrives, you must, must, must let them warm up to room temperature before you use any. I'm sure they're supposed to be refreshing, but not 15-hours-in-the-back-of-an-unheated-UPS-truck-in-sub-zero-weather refreshing.

• Episode 15. Still more proof that I've watched way, way too much Korean drama in the past year and a half: I now understand all the pop culture references in Hong sisters dramas. Including this amusing homage to I’m Sorry, I Love You. (The sweater gave it away, of course.)

You might also like
As Wishiwassian pointed out in her review of this show, Goong’s married high-schoolers have a lot in common with Choon Hyang