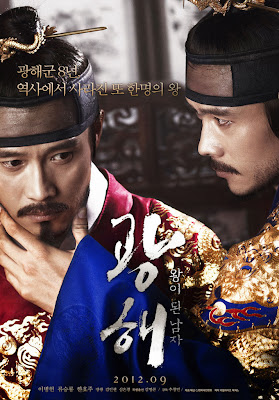 We’re spoiled when it comes to male leads these days: Korean dramas are filled with flawed, nuanced characters that change and grow as their stories progress, from Oh Soo in That Winter, the Wind Blows to Kang Ma Ru in Nice Guy.

Korean movies? Not so much, at least based on last year’s hugely popular film Masquerade. A spare, unidealized take on life in the palace, Masquerade offers a bawdy peek into what it might really have been like to be king during Korea’s Joseon dynasty. But unlike Ma Ru, its male lead actually is a nice guy—which is the movie’s biggest problem. 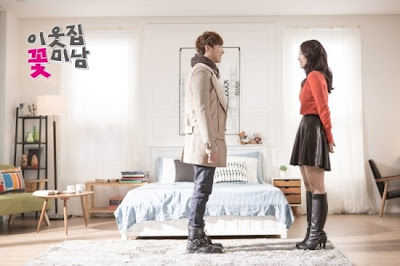 My first experience of Internet fandom was as a writer of fanfic. I don’t write it much these days, but I sometimes come across a show that I’m unwilling to say goodbye to. Flower Boy Next Door definitely falls into this category—the drama may be over, but its characters are still very much living in my head.

And because one of the greatest pleasures of maintaining this blog is that I get to post whatever the heck I want, here’s a short, fluffy piece of fan fiction about the continuing relationship of FBND’s Dok Mi and Enrique.

(For more of my fanfic, visit my page at fanfiction.net or head over to the only other Kdrama story I’ve written, an epilogue to Coffee Prince.) 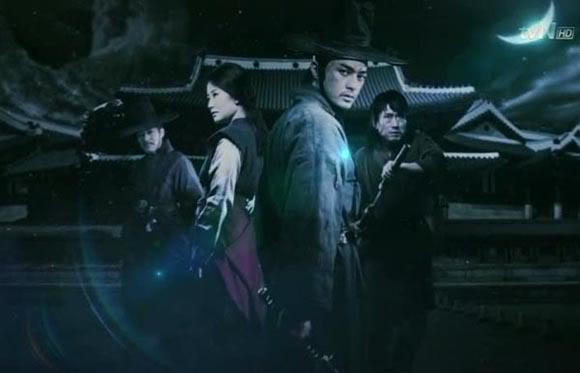 What it’s about
Working on behalf of a shady government agency that collects evidence of otherworldly doings, a young official is drawn into the investigation of supernatural occurrences. This mind-bending drama was inspired by the American show The X-files and covers some of the same ground—Vampires! Aliens! Ghosts! Mysterious smoking men!—but has a plot and characters of its own.

First impressions
Audacious and fun, this is an intriguing chimera of sageuk trappings and sci-fi soul, focusing on the appearance of a mysterious “flying ship” that happens to be an exact match for modern-day depictions of alien spacecraft.

Korean dramas have turned me into a connoisseur of kisses.

Before my obsession began, I had probably seen tens of thousands of kisses on television and in movies. But those were mostly casual, American-style kisses, ones that fit into the plot but didn’t mean much of anything in the relationship being presented. They were usually understood to be the first step toward a more physical relationship, not the culmination of a love story.

Kdrama kisses are something else entirely: They’re serious, soul-stirring events that have real meaning and profound significance to the characters involved. They’re the main attraction, not a relationship stage to move beyond. They’re at the heart of every kdrama romance, the scene you eagerly anticipate for five, ten, or even twenty episodes. Kdrama kisses are never blasé or offhand. And they’re about as rare as unicorns, which makes them even more special.

They do, however, come in some standard varieties. 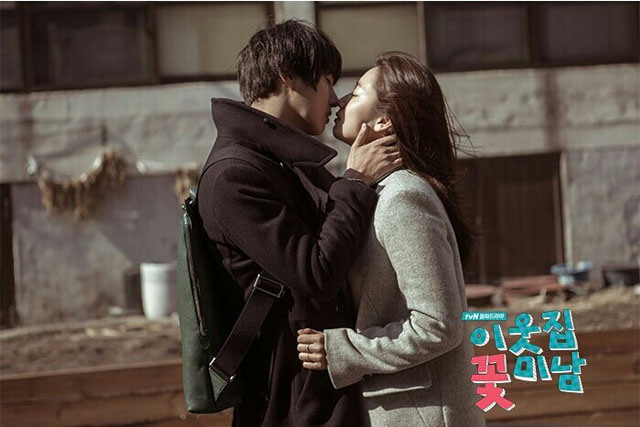 As seen in: Flower Boy Next Door, episode 16

Natural habitat: Shows in need of a ratings bump

In Korean dramas, a kiss is never just a kiss. It’s an opportunity for the show’s creators to indulge in all sorts of flashy cinematography—rapid cuts, slow-motion pans, and close ups so incredibly close you can actually count the pores on Lee Min Ho’s nose. The Swirlie is the king of all these showy techniques: complicated and time-consuming to film, it encourages maximum fangirl insanity by capturing the kiss at every possible angle. 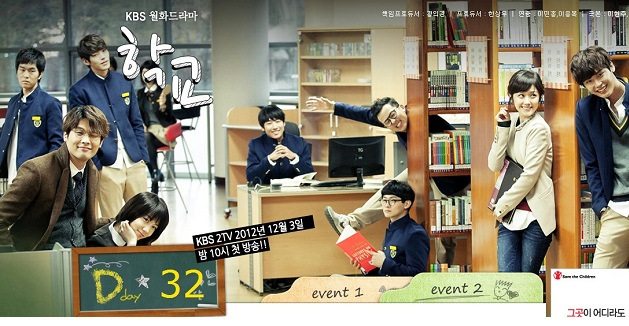 What it’s about
A pair of teachers whose philosophies are apparently at odds manage Victory High’s toughest class, facing bullies, academic underacheivers, and demanding parents.

First impression
This curiously teacher-centric school drama has yet to develop a strong pull for me. The first few episodes have done a fine job of setting up story lines for the rest of the drama—the college entrance-obsessed teacher versus the one who wants to teach the kids to think, the bully versus the bad boy with a heart of gold, the badass school chick versus the world—but none of the characters feel particularly compelling as of yet, and neither does the show’s overarching plot. Based on what I’ve heard, though, the secret ingredient has yet to be added to the mix: Kim Woo Bin’s magnetic troublemaker Heung Soo. 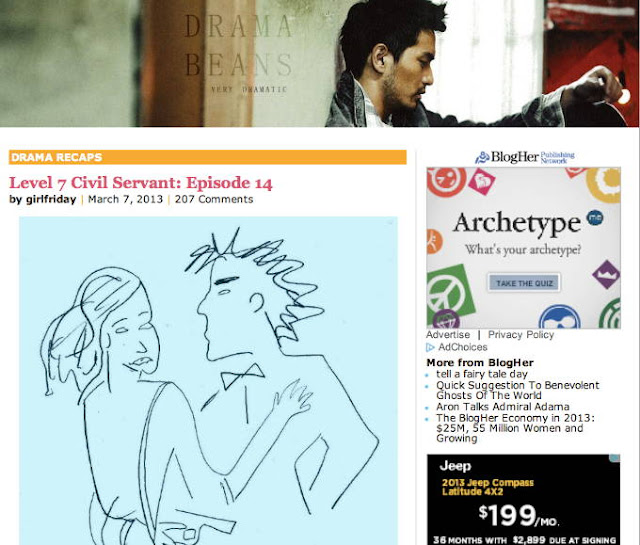 There’s a lot more to the Korean drama story than plot twists, broody shower scenes, and chaebols who sweep poor, hardworking girls off their feet. And although this is a blog about Kdrama, the shows themselves aren’t the only things I’m interested in discussing here: There’s also the online fandom that has grown up around them.

Watching Korean drama is a mostly solitary pursuit for me (in spite of my best attempts, I have yet to hook anyone I know in real life). But the more involved I become in the dramaweb, the more I realize that my feelings about the shows I watch are influenced by other people. Take Flower Boy Next Door—I was utterly swept up in the cycle of checking Couch Kimchi for episode stills, browsing Koala’s Playground for early reviews, poring over insanely detailed analysis on Tumblr, and then reading Dramabeans’ long, insightful recaps. Even the Dok Mis among us are never really alone when it comes to Kdrama.

More than any other website I visit (or maintain, even), Dramabeans is the hub of my online drama life. For me at least, it’s more than just another blog—it’s the spine of the Kdrama community. If I hadn’t found it after stumbling across Boys over Flowers on Netflix, I would have shrugged my shoulders and carried on with life, having learned only that Kdrama existed in the world, and that it might be worth watching more.

But the mere existence of a big, constantly updated site like Dramabeans is what brought me into the fold: it legitimized and normalized my preoccupation with Kdrama. Even more than a year later, it’s still my browser’s home page. And if I have time to visit only one website a day, Dramabeans is the one I choose. It’s expansive enough to be complete and informative, but not so expansive that trying to keep up with it would literally be fatal. (Unlike, say, the fun but insanely active kdrama tag on Tumblr.) It tells me what I need to know in the most entertaining way possible, through the voices of people who are smart and funny and insightful about not only Korean culture, but also about so many other things I love—including (but not limited to) storytelling, television, and celebrity.

So like a lot of other Kdrama fans, my hackles went up when I visited Dramabeans on Thursday morning to find a post about legal threats made against the site. Written by Javabeans, the blog’s founder, it read: 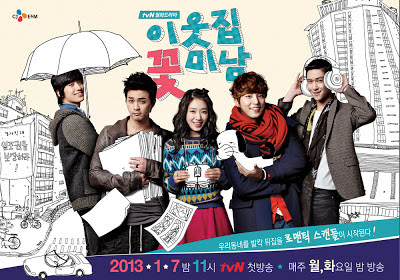 What it’s about
Flower Boy Next Door is the deceptively thoughtful story of a lonely, damaged girl who re-enters the world with the help of a quirky new acquaintance, panda-suit wearing, scene stealing, heart-exploding Enrique Geum.


Here’s a quick pop quiz for you before we begin this review in earnest. Are you a drama watcher who:

1) enjoys goofy character studies that present wonderfully detailed universes but don’t necessary have much of an overarching plot, or

Through the Looking Glass: The Park Shi Hoo Case on the Web

AGGGGHH! Due to a brain cell defect, your regularly scheduled Tuesday post arrives today. (Man, I should really learn how to use a calendar.)


I’ve thought a lot about whether I should write about the Park Shi Hoo news.

Surfers of dramaweb almost certainly already know more about this situation than they want to. But for those of us lucky enough to have missed the coverage, here’s a quick recap of every single piece of wholly trustworthy information that’s now available: last month, actor Park Shi Hoo was accused of rape after a night out with an entertainment-industry friend and a girl he knew.

As far as I can tell, beyond that it’s all hearsay and speculation. I’ve been keeping an eye on the big English-language news sites and their coverage of the story, and for every article touting some new piece of information about the case I can find two other articles that disprove everything it says.

I can’t even critically assess these conflicting reports: I have essentially no familiarity with the various Korean news outlets. If similar charges were leveled against an American star, I would have a better sense what was spurious and what deserved further consideration. No news outlet in the world is infallible, but when the New York Times reports something, I feel safe trusting them to get the facts right and present them in a reasonably objective manner. On the other hand, I wouldn’t even bother reading coverage of the same incident in Star magazine, a notorious supermarket tabloid. A lifetime spent consuming American news and culture has prepared me to understand the distinction between these sources. But Naver? Hankyung? Chosunilbo? I have literally no idea what their bent is or how trustworthy they might be.

And as someone who speaks only English, I’m at an even further remove the coverage. Relying on news that has been filtered through the English-language aggregators isn’t the best idea when it comes to actually understanding what’s going on.

Take Drama Fever’s blog. I’ve been reading it regularly ever since I first signed up as a member. Over that time its tone has changed considerably. In early 2011, it focused on posting news tidbits gleaned from sites like Dramabeans or Soompi. Later, it specialized in guest boggers. But since its infusion of venture capital money last fall, the Drama Fever blog has evolved into something of a supermarket tabloid of its own. And I’m not going to lie: I like its hodgepodge approach to celebrity gossip. I’ll happily watch videos of Korean cats getting their butts scratched, ogle photo galleries of handsome actors posted on their birthdays, and devour speculation about whether some girl group member I’ve never heard of is dating some boy group member I’ve never heard of.