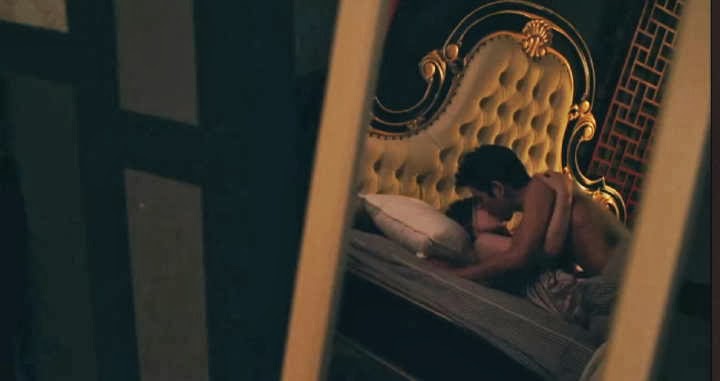 As a fandom that exhaustively catalogs, critiques, and names kisses, we sure don’t talk about sex much.

For some English-speaking fans, there’s a good reason for this: to them, Kdrama is a bastion of safety in an oversexualized world. The relationships it depicts almost always revolve around the soul, not the body, and the rare act of physical intimacy is treated with an almost sacred mindfulness.

I’m glad that Kdrama exists for people like that, but I can’t say that I’m one of them. I don’t mind a tasteful, consensual sex scene, and have actually been frustrated by the lack of naughty bits in Kdramas. To someone with a Western mindset, a romance that’s as bloodless as the one in Autumn in My Heart doesn’t feel like a romance at all. But even for me, the courtly, spiritual love at the core of so many Korean dramas is part of their appeal. When they’re done right, these shows are fairy tales separate from the world of the flesh, always pure and perfect and good. And because of this, a single Kdrama kiss has more emotional weight than all six seasons of Sex in the City combined.

When it comes to Korean television, there’s not much sex to talk about, anyway. Drama kisses are precious and rare, but drama sex is harder to find than Bigfoot riding the Loch Ness monster with a unicorn in a party hat looking on from the shore.
As far as I can tell, there are three standard Kdrama “bed” scenes. The first involves passionate kissing followed by a cut to some unrelated item, like the eye-covering teddy bears in Goong. Then there’s the wall-banger, which (obviously enough) involves an uncoordinated move toward a bed that sometimes results in less than graceful moments, like Dalja’s Spring and Lovers. And then there’s the big time: the undressing scene. It’s normally the woman who’s being undressed, and often to expose a scar that the male lead needs to kiss melodramatically before the main event (The Princess’s Man, Secret).

Lots of factors effect the intensity of skinship in dramas, but one of the most important is whether a show originally aired on a mainstream network or a cable channel. Most network shows will include at most one or two kisses, each calculated to coincide with a key relationship moment. Network kisses usually aren’t casual displays of affection that happen because characters like being close to each other. Instead, they’re contracts intended to cement a couple’s union. My Love from Another Star fits this bill: after an eternity of struggling with his feelings for Song Yi, Do Min Joon finally pulled her in for a kiss in the last few minutes of episode 15. But this was no kiss for the sake of kissing: It was a grand gesture intended to convey his willingness to finally be with her.

As for actual sex on network television, I have only this to say: Don’t hold your breath. These days it seems that the only characters getting lucky are the ones who need to have babies to further the plot, like the lead couple in last spring’s Jang Ok Jung: Live for Love.


Korean cable channels approach things a bit differently. Dramas on these upstarts often push the boundaries of acceptability, just like their American counterparts. They’re much more likely to acknowledge the existence of sex (whether before or after marriage), and often show characters engaging in physical contact for no reason other than pleasure. The female lead in Queen In-Hyun’s Man initiated lots of casual kisses, and the youthful couple in Can We Get Married? were clearly sexually active before their wedding day. When they weren’t too busy fighting and breaking up, they spent most of their time lazing around in bed together or affectionately kissing, hugging, or holding hands.

Skinship is also impacted by the age group of the drama’s characters. Kissing in high school shows is usually a one-off thing, as in both Monstar and Shut Up: Flower Boy Band, and it’s often laughably chaste, like the famous lip press in Boys over Flowers. Neither cable nor networks seem to allow characters to have sex until they’re in their twenties. (Intriguingly, a 2008 drama called Little Mom Scandal is a possible exception to this rule. I haven’t watched it yet, but it seems to revolve around teen pregnancy.)

The age of a drama itself is also an indicator of whether it will contain sex. Romantic comedies in the mid oughts were full of scenes that now seem shockingly explicit, even on network shows like Lovers, Coffee Prince, and My Lovely Sam Soon. Kdramas are nothing if not slaves to trends, and back then the trend was hooking up. Now, extreme chastity reigns supreme on the networks—and isn’t so uncommon on cable channels.


Almost nobody gets any tail in the past few drama cycles, even if they were grownups in serious romantic relationships. If memory serves, even the cable potboiler A Wife’s Credentials didn’t include any funny business, and that was a show about a woman who ends her marriage (partially) because she’s attracted to a man who isn’t her husband. Beyond one scene discussing sleeping arrangements at their new love pad, they might as well have been siblings. Based on Equator Man, That Winter, the Wind Blows and all of tvN’s Flower Boy dramas, you’d never guess that such a thing as sex even existed in Korea. (Although a group of clever Flower Boy Next Door fans did find a scene that hints that Dok Mi and Enrique might have gone all the way...off camera.)

Korean culture really does seem to be less casual about sex than we are in most of the West, and it’s logical that this difference could be seen in stories told for Korean audiences. But the very structure of many Kdrama narratives also work to make sex improbable. Most Korean romances build narrative suspense from the fundamental conflict of will-they or won’t-they. To milk this tension for as long as possible, couples generally don’t get together until the very last minute, which doesn’t leave a lot of time for them to fool around. Therefore, no nookie.

Cable’s I Need Romance 3 is dealing with this issue right now. The latest installment in a series of cable dramas known for their frank approach to sexuality, it finds itself in an awkward position: Each of the earlier INRs set the stage for sexual activity by focusing on an already established central couple. But this show is a classic will-they-or-won’t-they with undertones of a love triangle. It’s highly unlikely that any of the triangle relationships will be consummated before the conclusion of the series, so the screenwriters are left with secondary characters and the occasional flashback to provide the franchise’s trademark racy bits.

But even those carefully explicit scenes are nothing compared to what came before. INR3 has a strong tell, don’t show vibe. We’re told that one character meets a stranger for no-strings-attached sex, but we don’t see them engaged in anything more than a kiss. Another character is on the outs with her boyfriend, although they’re known to have saved up for trips to hotels and spent hours necking in random alleys. Compare this with the first I Need Romance, which devoted an entire scene to showing its lead couple cuddled up in the back of a van, all sweaty and bathed in post-coital bliss as they discuss the female lead’s first orgasm. The male lead gets adorably giddy about it, while his girlfriend seems cautiously interested in repeating the experience.

Shows that aren’t necessarily romances can use the sexual freedoms of cable networks in service of unusual narrative choices. Most dramas gift their lead couple with a romantic date or a few happy days of love before all hell breaks loose, but Cruel City didn’t have time for these niceties. Its inscrutable, dangerous lead was too busy living the thug life to spend much time with his female love interest, so the show used a steamy bed scene to quickly tie the characters together without “softening” the Doctor’s Son.

So is the Kdrama pendulum actually swinging toward chastity, or am I imagining it? Is this a side effect of Korea’s conservative new president? A response to so-so ratings for more graphic shows? I have no idea. But I can’t wait to find out where we go from here.
Posted by Amanda at 9:00 AM