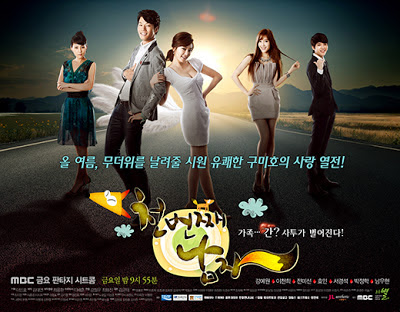 What it’s about
Gu Mi Jin is a nine-tailed fox who lives in human form with her newly human mother and sister. Like so many other Kdrama heroines, she’s desperate for love, but she’s got bigger plans for her soulmate than couples rings: she’ll die in three months if she doesn’t eat the liver of her thousandth man. Naturally, not just any guy will do, so she's on the prowl for “the one.”

First impression
My first-ever drama short is proving to be a goofy, upbeat romp with the added bonus of an intriguing central concept. It’s light as air, but not necessarily in a bad way.

Final verdict
Episodic and insubstantial, The Thousandth Man brings the mythical gumiho into the modern urban world, surrounding its family of foxes with spas and playgrounds and the petty concerns of humans. There’s little otherworldly magic about them, and being a gumiho seems to largely involve superhuman speed and the ability to spontaneously turn into a femme fatale, suddenly sprouting a pleather catsuit, glamorous red fingernails, and a smoky eye suitable for a night out on the town.

Like most Korean sitcoms I’ve seen, The Thousandth Man’s production values aren’t especially different from straight-up Kdramas. There’s no laugh track and it looks like every other show on the air. But in addition to shorter episode running times, it seems that most Korean sitcoms feature lots of characters, each with a little snippet of story that’s only explored on a superficial, comedic level. Even the impending death of this show’s heroine is mostly played for madcap laughs rather than the angsty tears that would be inevitable in a drama version of this story.

There are moments of sophistication here, notably seen in Gu Mi Jin’s appreciation of how much the people, geography, and language of Korea have changed in her thousand-year life. Unlike our current crop of time-travel dramas, The Thousandth Man acknowledges how fundamentally different everything in the world has become, “changing more in the past 90 years than it did in the past 900,” as one character puts it. The show even goes so far as to make Gu Mi Jin’s Joseon-era journal utterly uninteligable to people who haven’t specifically studied old Korean. The story also touches on another gumiho who’s so jaded and tired of living in the world she’s not even sure she wants to live on as a human. (In my dream drama retelling of this story, she’d be the lead.)

On the other hand, the show’s mythology could have used more development: It never manages to explain how the gumiho family has managed to live for so long without anyone noticing that they don’t age. It also never really clarifies what becoming a human means for a gumiho. When they eat that final liver, do they start the clock ticking on a normal human lifespan? Could they have babies? Do they lose their eyeshadowed alter egos? And what’s the big deal about becoming a human anyway, when the only drawback of being a gumiho is a taste for organ meats and nine lovely (but easily concealed) tails?

The Thousandth Man also suffers from a frustratingly naive and uninteresting female lead. She refuses to eat the liver of any man who doesn’t love her and volunteer to be consumed, but the show leaves her almost totally out of the transaction. Her emotions and motivations—beyond whatever starry-eyed Joseon chick-lit she read growing up—are at best glossed over. What must it be like to make someone love you and then kill them, genuinely believing it’s the noble thing to do? Dull emotions are shown as one of the side-effects of gumiho-hood, but for me this isn’t sufficient to explain away the serious issues surrounding the female lead’s diet.

Far more compelling than Gu Mi Jin are her boy-crazy, former-fox sister and their pragmatic mother, who loves and wants the best for her girls, just like moms everywhere. These two get less screen time, but they still manage to be the most memorable thing about the show. Also high on the fun-o-meter are a series of Joseon flashbacks that show Gu Mi Jin and her sister as girls.

For someone who’s drawn to romantic comedies, I suspect The Thousandth Man would be a fun twist on the standard plotline. For melo-obsessed me, it was like a plate of salad to a gumiho: I could get it down, but it wasn’t what I really wanted.

Random thoughts
• Episode 2. Did Anna Nicole Smith teach us nothing? The obvious answer here is to find some old, practically dead guy who will be so happy to hook up with a hot girl that he’ll give her anything—including his liver. Or, failing that, meeting Sisyphus, who could have donated all thousand livers himself.

• Episode 4. I hope the female lead’s wardrobe isn’t an indication that 80s fashions are coming back into style. I already spent one decade dressed like Stacy from the Babysitters Club, and it was more than enough.

• Episode 4. Isn’t the cute basketball player a little young for the lead's sister? 985 years is a pretty significant age difference for a noona romance, after all.

• Episode 4. On what planet does it make sense to only eat the livers of good guys who are willing to die for love? Wouldn’t a thoughtful gumiho exclusively eat bad-guy liver, Dexter-style? I guess this show's lead is looking to Darwin out the sweet portion of Korea’s male population. Pity, because as Song Joon Ki knows all too well, there just aren't enough nice guys in this world.

• Episode 7. The thousandth sign that I watch too much Kdrama? I’m starting to recognize where things were filmed. And I don’t mean, “Oh, look...there’s Namsan Tower!” It’s more like “I think I know that shrub.” Case in point: the male lead’s house in this drama was also used to film I'm Sorry, I Love You.

The episodic romances of Twelve Men in a Year
Posted by Amanda at 9:00 AM