Whatcha  Wearin’—a naughty, adults-only romantic comedy from Korea—answers one of the fundamental questions of modern life: With all the technology standing between them, how can two people go about making a real, human connection?

After all, this movie’s lead couple doesn’t meet in one of the time-tested ways you might expect: there’s no blind date or longing glances across the office. Instead, their meet-cute happens over the telephone, when Yoon-jeong misdials her boyfriend’s number and unwittingly has an extremely racy exchange with a stranger. Horrified, she hangs up as soon as she realizes her mistake—but not before leaving quite an impression on Hyeon-seung, the recipient of her call.

A series of candid phone conversations follows, during which the two share the most private and blush-worthy details of their lives and loves. Starting a relationship without meeting in person actually sets them free—when they’re talking, Yoon-jeong and Hyeon-seung can be their unvarnished selves and voice their most intimate thoughts without worrying about the consequences. Fostered by the anonymous nature of their relationship, their no-holds-barred friendship quickly becomes an important part of their lives.

Played with low-key charm by Ji Seong (TV’s The Great Seer) and Kim Ah-joong (drama Sign), the leads connect on a number of levels. Both are frustrated artists—Yoon-jeong is a design hopeful who specializes in revealing lingerie, and Hyeon-seung is a wannabe musician stuck in a day job he hates. There’s also the issue of their significant others. Yoon-jeong awaits a proposal from a wandering boyfriend, while Hyeon-seung is nursing a broken heart after seeing his beloved ex-girlfriend with another man. 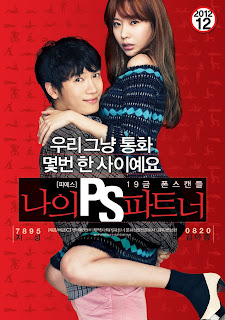 In spite of spending almost half the movie apart, the actors manage to build zingy chemistry. When their characters finally meet, the sparks are instantaneous—but not without complications. Their outside relationships are certainly an obstacle, but so is learning how to be together in the flesh. The movie’s most memorable scene finds the leads on opposite sides of a bed, facing the room’s walls and talking to each other through their phones rather than turning around and communicating face to face.

Set in an upscale but believably realistic urban universe, Whatcha  Wearin’ is a sex comedy that gets its laughs from the bawdy discussions of its characters. Not for the faint of heart, it doesn’t shy away from discussing (and showing) the physical aspects of romantic relationships in vivid detail. Although its American release will be unrated, in Korea Whatcha Wearin’ is restricted to audiences over 19. Full of boob shots, discussions of penis size, and steamy bed scenes, it’s easy to see why. (It seems likely that the audition process required a lot of lusty moaning and the scratching out of no-nudity clauses in contracts.)

Playfully edited and crisply shot, this is a modern take on the age-old story of girl-meets-boy that takes a refreshingly graphic approach to sex and love. (And happens to be obsessed with underwear.)

For more information, visit the official website (Korean only)

• After watching Shin So Yool in this movie, I’ll never be able to see her character in Answer Me 1997 in the same way. (And that way would be clothed.)

• If only plastic surgeons in Korea were a bit more like the Soup Nazi in Seinfield, Kim Ah-joong might be a watchable actress, having benefitted from a few exclamations of “No more surgery for you!” As it is, though, I’ve seen more realistic looking faces cast in wax at Madame Tussauds.

• This movie taught me at least one Korean word I never expected to know. (It starts with f and ends with uck, in case you’re wondering.)
Posted by Amanda at 9:00 AM