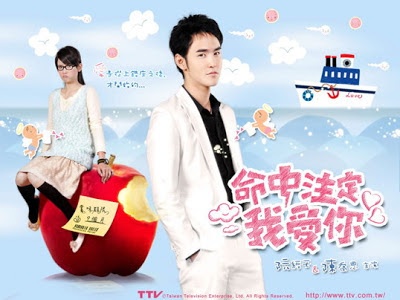 What it’s about
After the most ridiculous case of mistaken identity in drama history, an average office girl finds herself pregnant with the tenth-generation heir of a cleaning-product empire. With the help of their colorful families, the two decide to get married—but must then navigate the eighteen episodes of tribulations that stand between them and their happy ending.

First impression
As of episode 1, Fated to Love You embodies all three Cs of Asian rom-coms of a certain vintage: cheaply produced, cheesy, and charming. It reminds me of Kdramas from the early 2000s—its creators may not have had a lot to work with, but they made the most of what they had.

Final verdict
It’s fitting that this show’s female lead spends a lot of time worrying about being a “sticky note girl”: someone common, disposable, and too eager to please. Ultimately, this description is a perfect fit for both her character and Fated to Love You itself. This isn’t necessarily a bad thing, though—sometimes you want to watch television for easy, uncomplicated laughs, not to marvel at spectacular production values or deep insight into the human condition. When you’re in that kind of mood, you could definitely do worse than this silly story of finding love in unexpected places.

For a drama that’s so long—it’s twenty-four episodes, many of which clock in at over ninety minutes—Fated to Love You is zippy and entertaining. It’s populated by over-the-top characters and crazily improbable plot twists that are made bearable by the fact that the show never takes itself too seriously. Big-hearted and puppyish, it uses its central romance to explore the culture clash between the plain-Jane female lead’s country-bumpkin family and the father of her unborn child, a refined city dweller with more money than he knows what to do with.

Tiresome plot machinations do derail things a bit toward the end (a dead cell phone battery keeps the leads apart for a full episode), but most of the story manages constant forward momentum—which is more than I can say for many Korean dramas these days. Kdramas seem to get bogged down in their concepts, which makes their stories feel hide-bound and repetitive. Take this spring’s similarly themed I Do, I Do: the only narrative tension it could drum up was in the form of corporate wrangling, because it had so very little to say about its central concept beyond “She’s pregnant with a younger man’s child.” This aspect of the plot never went anywhere until the absolute last minute—it was the show’s hook, and to lose or move beyond that hook would be unthinkable for a Kdrama. In contrast, at Fated to Love You’s heart is a plot that breathes and grows and stretches; it moves freely from place to place and idea to idea. It’s a story about two characters and their relationships, not about a scenario that’s easy to hang a marketing strategy on.

Cute, cartoony, and averse to logic in all its forms, Fated to Love You is by no means well made. But it’s sincere and its goofy antics made me laugh out loud an embarrassing number of times. After all, what’s not to like about a sticky note?

Random thoughts
• Episode 8. This entire drama, summed up in one line of dialogue: “I admit I was shocked by your chicken suit.”

• Episode 18. I still can’t get over how different Taiwanese drama is from Kdrama. Case in point? The male lead just went to a brothel and made a scene when he realized none of the prostitutes reminded him of the female lead. It played a little less sleazy than it reads, but good golly is that upsetting. I miss Kdrama and its appealingly puritanical ways.

The next time you decide to save money by putting your male lead in the same pair of pants for 90 percent of a drama, consider choosing something less flashy than the zipper-heavy trousers in this show. It makes it pretty easy to spot that you saved your budget for the girls’ clothes.

You might also like
Taiwanese drama Aumun’s Concerto, for a melo take on an unplanned pregnancy leading to love

Pregnancy-themed Kdrama I Do, I Do (although I didn’t)