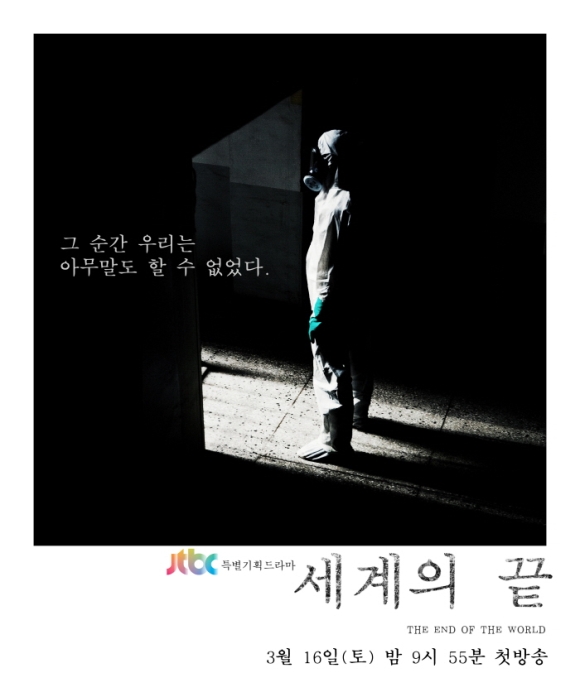 Final verdict
Atmospheric and grand in scope, The End of the World feels like one epic movie. Each episode is part of an interconnected narrative exploring the outbreak of the mysterious M virus, moving swiftly from its first appearance on Korean shores to the breathless chase for its sole survivor, and then from the business of quarantine to the desperate search for a cure.

This show’s outstanding performances, intricate script, and perfect tone set it apart from pretty much every other Korean drama I’ve seen. There are no poop jokes or dreamy flower boys, no sassy ajummas or chaebol romances. Instead, The End of the World is a gritty, harsh-light-of-day story about real people working against impossible odds to prevent a horrible tragedy.

The script follows three groups of medical workers—the CDC’s top brass, who are in charge of public relations and national disease policy; the medical researchers who work to synthesize a treatment; and the investigation squad who visit the sites of outbreaks and piece together the mystery of M’s origin. These three perspectives allow the drama to cover a lot of ground. It’s a political thriller, a forensic mystery, and an epidemic riddle that’s every bit as scary as any horror movie. Best of all, it’s a human drama that pushes its characters to the breaking point, using their desperation to explore all the dark and unpleasant facets of human nature.

The M virus itself is the best macguffin ever, and acts as a fresh new spin on the standard ailment in this kind of story. Deadliness is only the first in its bag of tricks—even worse are its neurological symptoms, which make its victims dangerous as more than just plague vectors.

People who stay on top of dramaland news know about this show for the wrong reasons: As was widely reported, The End of the World’s network cut its run from 20 episodes to 12 in response to lousy ratings. I originally didn’t want to talk about this sad fate here—this drama deserves to be reviewed on its own merits, not its popular reception. But it turns out that you can’t separate the two; being cut in half midstream palpably altered its storyline and made for a fairly strange disconnect between episodes ten and eleven. Don’t let this scare you away, though. The End of the World is absolutely still worth watching, and it even manages to provide a satisfying finale in spite of its curtailment.

Random thoughts
• Episode 1. I’m a sucker for plague stories, so I went out of my way to download this drama and a set of fan subs. Created by the team behind last year’s wonderful A Wife’s Credentials, it’s a zippy medical thriller that I’ve heard lives up to its promise.

• Episode 1. Like America and England, Korea is clearly going Sherlock mad these days. This show features a snarky genius prone to freaking people out with his stunning feats of dedication, just like the currently airing Dating Agency: Cyrano.

• Episode 3. This is my first time watching anything subbed by Dark Smurf, and I have to say they’ve done great work on this drama. The dialogue is fast and complicated so it could have been a total mess—a la Joseon X-files—but instead the language is crisp and easy to follow. (I wouldn’t complain if they talked a little slower, though. I keep looking away for a split second and missing some key plot point.) Added bonus? Mr. Hong from Coffee Prince is in this show! Excuse me while I fangirl a little. [Finale note: That Mr. Hong can really act! Who knew?]

• Episode 5. I guess I can see why people in Korea didn’t watch this show. It’s methodically paced and doesn’t pander—there are no on-screen definitions of hard words or frequent flashbacks to help make the complicated plotline easier to follow. But they missed out on something great: its two-pronged storyline is tense and transfixing, and obviously has lots of wonderful things in store. In fact, I bet they don’t even get to the “end of the world” in their concept before the series ends at episode 12—the storyline is moving so carefully that they’re not going to have time to really focus on the details of a pandemic.

• Episode 5.  It’s weird that romantic comedies—shows that are ostensibly created for female audiences—treat their girl characters with less respect than male-skewing action dramas like this one. I noticed the same thing in Time between Dog and Wolf: instead of being useless victims of broken heels who wail oetekke a lot, Kdrama action girls get the job done.

• Episode 5. This show is incredibly smart on pretty much every level, but I especially like that they’ve given the carrier a limp. It makes him easy to spot—both for us and for characters on the show—and also gives the director opportunities to play around with zombie tropes. Seen staggering down an alleyway in this episode, he could have been a Romero zombie just as easily as a Typhoid Mary.

• Episode 6. As far as I know only one site has English subs for this series. And according to that site, only 124 people have downloaded the subtitles for this episode. That’s just depressing—this series might be hard to come by, but it’s absolutely worth watching.


• Episode 7. It’s been a long time since I’ve been confused about who’s who in a Kdrama. This show keeps losing me, though—it has lots of characters, and they’re often referred to only by last name and job title. Plus, I don’t know most of its actors, which makes it even more confusing. (I do know one of the male leads, though: he played the Joker-esque bad guy in King 2 Hearts. And a character in this show just accused him of being a joker. Intentional? Or am I reading too much into this?)

• Episode 7. Well, there’s a singing scene that wasn’t thrown in to sell soundtracks. (Unless they were going to be sold to a warlord who wanted to use them to torture his enemies.)

• Episode 7. This episode includes a completely traditional Kdrama moment: the heroine’s mom quizzes her crush about his zodiac sign and whether he’s an oldest son. Only this time, everyone involved is wearing a hazmat suit, and one of them may or may not have a deadly virus. Genius, I say. Genius.

• Episode 8. Just when I thought this show might become bogged down in politics and get boring, they throw in the kind of cliffhanger that makes me want to keep watching, even though it’s past my bedtime and I need to work tomorrow. The Drama Overlords are cruel indeed.

• Episode 10. In spite of its universal feel, there are some signature Kdrama tics about this show. For one, every big reveal is accompanied by a close-up of every single person in the room. I can’t even remember how American television would handle scenes like this, but it sure isn’t that way.

Episode 10. Most of Korean shows I watch are youth centered and tend to showcase actors who have had tons of plastic surgery, especially on their eyes. It’s almost weird to see all the natural-looking people in this drama. I’m used to faces that were made by doctors, not nature.

• Episode 10. I love it when they leave the commercials in cable shows like this one. It’s always a pleasure to see Song Joong Ki on my television, even if he’s shilling for Sprite.

• Episode 12. It’s easy to see what got short shrift because of this drama’s abrupt truncation: the love-triangle-ish relationship between the CDC administrator, her husband, and the good-natured head of research. I’m sure this would have been a genuine exploration of adult relationships and the value of family, but as things stand now this plot thread is only hinted at. We certainly know the male actors were up to the challenge—they both starred in last year’s A Wife’s Credentials, which covered very similar territory and was a product of the creative team behind this show.


• Episode 12. If I could wish for any change in this show, it would be for a less claustrophobic focus. It never really gave us a sense of how the average person experienced the plague, or what it meant to people outside of the medical profession. (That’s probably a lifetime of disaster movies talking, FYI.)

You might also like
A Wife’s Credentials, which shares this show’s somber, real-world tone
Posted by Amanda at 9:00 AM