Its tone. With shaky camera work and a candid representation of the brutality of high school, Monstar’s low-key approach to the trials of everyday life is intriguing and distinctly different from most glossy Kdramas. It will make you want more. And guess what? There is no more. If you start watching now, you’ll almost certainly burn through all four of the available episodes in one day, leaving you hanging for a full week for your next fix. Save yourself the heartache: don’t hit play. 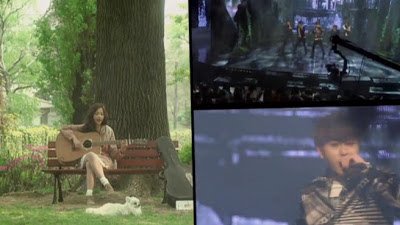 Its music. Even those who are normally immune to the charms of Korean music will find themselves listening to this drama’s songs over and over. From classical remixes, guitar ballads, and jazzy numbers to hip-hop influenced Kpop, Monstar has it all. Its method of delivery makes these songs especially dangerous: It doesn’t waste time on interminable idol solos, sending you fast-forwarding to the part where the story picks up. The plot seamlessly incorporates its musical numbers and uses them to deepen the characterization of its main players. But just because Monster doesn’t feel like a show that exists solely to shill soundtracks doesn’t mean you won’t be listening to its music nonstop. Even when you should be doing other things, like working or studying. 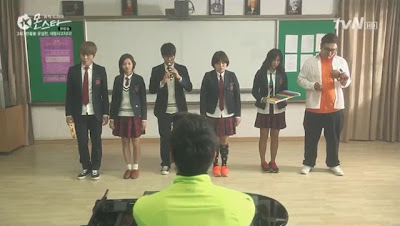 Its characters. There’s no escape from this show’s appealing cast of characters—just one breezy scene will irreversibly pull you into their world, never to be heard from again.

Initially billed as a show about a Kpop idol who’s forced to return to school to repent for public misbehavior, Monstar is quickly proving to be an ensemble drama revolving around a ragtag group of misfits. And who doesn’t love misfits? In addition to the marketing-bait that is Yoon Chul San, the boyband member who’s on forced hiatus to rehab his image, Monstar gives us a cigarette-smoking girl rebel with a punk-rock attitude and possible ties to gangsters, a geeky boy with a beautiful singing voice who’s mercilessly bullied by the boys in his class, and a popular guy who might just have the soul of a misfit.

Best of all is female lead Min Se Yi, who has just returned to Korea from New Zealand, where she spent most of her time hanging out with sheep on her uncle’s farm. In spite of some serious 4D tendencies—she’s so prone to getting lost that she takes pictures of street signs to be sure she’ll be able to find places again—Se Yi is kind and funny and more than able to stand up for herself, her friends, and even stray birds that find their way into her school’s classrooms. She’s a once-in-a-blue-moon Kdrama girl who’s perfectly flawed: She’s capable but sympathetic, sweet but steely, brave but broken. (And she still has a soft spot for her friends from New Zealand, as the sharp-eyed will note: she keeps a pair of stuffed sheep in her bedroom.)

Monstar has 8 episodes to go, which means it’s a sure bet that we’re going to see all of these wonderful characters suffer, cry, and fail time and time again before the finale rolls around. This drama will torture them, and you—if you succumb to its siren call. Consider yourself warned. 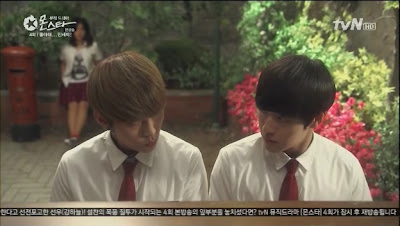 Its story. Instead of rushing headlong into ploty busyness, Monstar is taking its time to introduce its characters and build their world, all the while leaving behind an enticing breadcrumb trail that hints at an overarching plot. How is it that all three points of the show’s love triangle seem to have known each other as children? Just when did Chul San recognize Sun Woo? Were Se Yi’s mom and dad part of a love triangle with Ahjussi? What’s up with the bloody hand scene? Will the button Se Yi pulled from Chul San’s jacket come up again later? (They never really showed just which button it was—will it turn out to be the one over his heart?)

I can’t answer any of these questions, and if you watch you won’t be able to either. This nasty Monstar has barely scratched the surface of its plot, but because only one new episode is airing per week, we might conceivably have to wait until August 2nd to find out what it all means. (That’s when the finale will probably air. Not that I’m counting or anything) 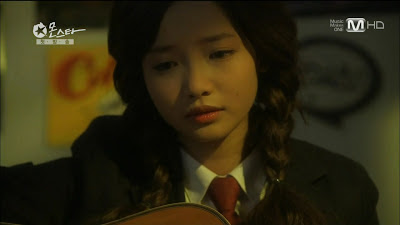 Its feels. It’s my suspicion that the world’s most foolproof recipe for bawling is a group of compelling, relatable characters showcased in a well-constructed coming-of-age story. We’ve all been there, right? Whether you’re from the class of 1950 or 2020, you know what it feels like to be bully and bullied, insider and outsider, winner and loser. And this show is especially virulent when it comes to the key sources of high-school angst: from dead dads, mommy issues, and long-lost bromances to love-triangle losers. Which is yet another reason to beware the Monstar: We’re all clearly in for a world of hurt.

Forewarned is forearmed: If you want a successful, balanced life you should avoid Monstar at all costs. But if you want to watch a good Kdrama that might just become great, you should do the opposite.
Posted by Amanda at 8:15 AM