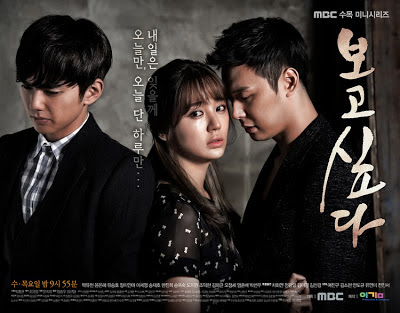 What it’s about
A fashion designer and cop fall in love as they deal with their shared history, which (in the way of Korean dramas) revolves around a childhood full of tragedy, abandonment, and cruelty. They eventually realize that not everyone from their past wants them to be together.

First impression
You know how when you’re at a restaurant and someone gets something that’s super spicy and they freak out, and then everyone else in your party is obligated by some sort of lemming-like instinct to try a taste of whatever the hot thing was? Well, that’s what this show is to me...only with misery. I’ve heard good things about it, but word on the street is that it’s so unrelentingly tragic that Dramabeans has already dropped recapping it as of episode 4. How can I say no to a challenge that? So far, so miserable: I’m ten minutes in and there has already been one brutal beating and several cases of child abandonment. Bring it on, Korea! Whatever you can dish out, I can take.

Final verdict
Thanks to its compelling group of central actors and a few wonderful scenes, I don’t regret watching I Miss You. And that’s saying something—the things this drama had going for it didn’t even begin to make up for what it was lacking.

For the first half or so, I thought it was going to be a decent show. The early episodes were action-packed and the characters were relatable (however crazy their backstories might have been). The child actors were surprisingly good, and once their grownup counterparts arrived it was a pleasure to watch the quiet intimacy and simmering chemistry between Yoon Eun Hye and Yoo Seung Ho. I also really liked the character of Han Jung Woo, a melodramatic lead that managed to be all casual charm and smiles no matter how awful things got for him.

But the show frittered away this strong foundation by filling most of its episodes with underdeveloped murder mysteries, useless side characters, and pointless secondary (tertiary?) plots. It had lots of forward momentum and didn't dwell too long on any particular secret or plot point, which was nice. But the cost of this zippy pacing was total abandonment of anything like logic or consistent characterization.  Whatever happened to the real Harry Borison? Did Kim Eun Jo have a reason for existing beyond making it less weird that Jung Woo spent fourteen years living with Soo Yeon’s mom, habitually calling her “girlfriend”? What was the motivation for Michelle Kim’s murder? We’ll never know the answers to any of those things, because I Miss You settled for skin-deep piffle. When it should have explored its characters on a human level, it glossed over depth in favor pat answers and scenery chewing histrionics. When it should have built a strong plot to carry its narrative from beginning to end, it was content with wheel spinning calculated to fill time.

Random thoughts
• Episode 3. A lifetime of psychoanalysis is not going to fix the scars inflicted on every young character in this episode. No wonder the male lead becomes obsessed with the girl, having essentially failed her at what will probably be remembered as the worst moment in either of their lives.

• Episode 3. Joon reminds me of Michael Jackson’s youngest son. Even before his dad died, he always looked distressed and tragic under that dark fall of hair.

• Episode 3. Boy, that’s one localized snowstorm. As the detective is kneeling on the snow covered road, you can see bright green, totally bare grass just behind him.

• Episode 4. Two realizations: (1) I love this show. (2) I should have waited a lot longer before starting it, because if the kids’ portion is any indicator, the wait between episodes is going to be long and painful.

• Episode 4. So this pair of shiftless Korean thugs have hanging in their lair a poster for the Ethan Hawke movie based on Dickens’ Great Expectations. Classy, for gangsters. Also interesting because I think Korean dramas are very Dickensian—they’re melodramatic and over the top and not afraid to use coincidence and cliche in their favor. Dickens was a great writer and all, but he painted with a broad brush that, evaluated by today’s standards, would be embarrassingly cheesy, Not unlike, say, a juicy Korean melo.

• Episode 5. It’s too early to judge the grown-up actors in their roles at this point, but what I’ve seen, I love—they’re all so young and beautiful it kind of hurts to look at them. I especially like that Yoon Eun Hye is a punk-rock fashion artiste, not one of the cubicle-dwelling drones that populate most fashion-themed workplaces in the Kdrama world. This is also the first time I’ve really been drawn to Yoo Seung Ho in a role, and I think it’s fantastic how ambiguous he is at this point. He might turn out to be a nice, cuddly second lead, but I’m also getting dangerous vibes from him. (Maybe it has something to do with that little trick with the brake pedal? More, please!)

• Episode 7. Too bad I Miss You’s plot slowed to a crawl the second the adult cast took the stage. There are lots of great things to explore—the murder mystery, the little sisters, the growing up years of the leads, the dynamics of revenge, etc. Yet the show is just spinning along, doing very little with its time.

• Episode 7. Ever since reading this article at The Vault, it’s become less amusing and more sad that Kim Mi Kyung is in 2 out 3 dramas on air at any given time. The drama industry is getting away with unforgivable labor abuses. http://vaultofdoom.wordpress.com/2012/11/23/the-yeouido-observer-006-show-me-the-money/

• Episode 7. Although I like Park Yoochun as much as the next pervy noona, I wish they’d just write him out of this show to focus on the important things, like ensuring that Yoon Eun Hye and Yoo Seung Ho spend at least half of every episode cuddling and/or making out. She’s never been more beautiful than she is as Zooey, and he’s gone from goofy second lead to smoking, smoking hot drama star. Heck, let’s go ahead and petition for a name change for the show. “Zoey and Harry’s Twice-Weekly Hour of Sexual Healing” has a nice sound to it.

• Episode 8. First world problem alert: My new black-Friday TV is so high definition that I keep getting distracted by a strange scar on Park Yoochun’s check. Has it really always been there, and I’ve just never noticed?

• Episode 8. That almost kiss has rendered me almost dead.

• Episode 12. Reality check: If the boy you liked when you were fifteen read the diary you wrote about him, you would have been mortified, not dewily flattered like Zooey is in this scene.

• Episode 15. As a designer, it’s only natural that Zooey’s fashion sense would be patterned after style icons from the past. I just never would have expected the combination of Cher from Clueless on bottom and Dorothy from Golden Girls on top.

• Episode 16. This show may have had an awkward, teary transition into adulthood (then again, who didn’t?), but it has turned into a speedy mystery that never lacks in forward momentum. Things happen, secrets are revealed, and people change in every episode, which is a refreshing change from all the clunky, go-nowhere plotting in recent dramas.

• Episode 19. Who knew that cold toes were a fatal condition? Or I suppose it’s possible she died of boredom—this show is bringing me ever closer to that demise myself.

• Episode 21. Yoon Eun Hye’s pointy nails in this drama are really freaking me out. Is she planning on scratching out somebody’s eyes with them?

* Episode 21. So does Harry Have an oubliette under the bathtub or what? Is this place Seoul's version of the Winchester Mystery House?

Watch it
Drama Fever
Yo Drama

You might also like
Can You Hear MyHeart, an earlier effort by I Miss You’s screenwriter that seems less terrible in retrospect