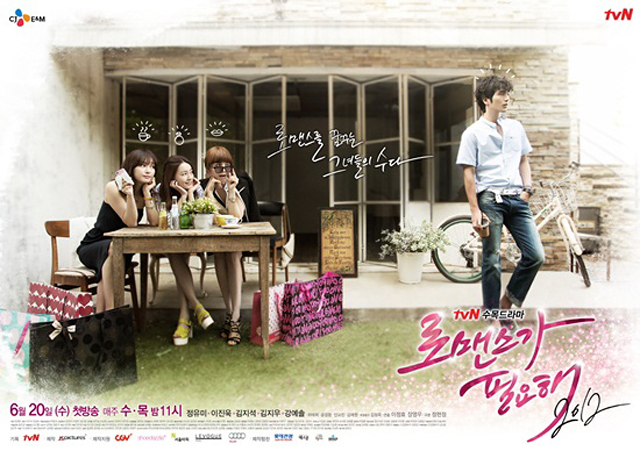 What it’s about
The trials and tribulations of Yool Mae and Suk Hyun, long-time best friends and sometime lovers, and their group of thirty-something friends. In spite of the shared name and tone, this drama is only tangentially related to the original I Need Romance (2011).

First impression
What a breath of fresh air—a youthful and contemporary rom-com featuring romantic relationships approximating the ones we have in the real world. As of episode 2, I’m still struggling to get past my intense love for the original and enjoy the new one on its own merits—the sequel seems a little more plastic and less realistic, and the characters and actors aren’t as appealing as they were the first time around. Maybe a little more deviation from the original would have been good here; it would have made it harder to compare the two seasons and find the second one lacking. Also, I sorely, sorely miss Kim Jung Hoon, who’s so likeable that he automatically makes me root for his character, no matter how much of a tool he’s being.

Final verdict
My favorite drama of the year to date (Sorry, Shut Up! Flower Boy Band: You’ve been bumped to second place).

Compared with the first “season,” I Need Romance 2012 is a darker, less comedic exploration of the things that keep us apart and bring us together. While the three C’s of the 2012 edition—cast, characters, and chemistry—aren’t quite on par with the wonderful original, all is forgiven in light of INR 2012’s better-plotted script and tendency toward dialog that’s equal parts painfully funny and painfully truthful.

This time around, the show comes off as less of a cartoon caricature of Sex in the City. There’s some naughty talk and at its heart is still a strong female friendship, but INR 2012 lets the thoughtful earnestness inherent in Kdrama take the driver’s seat, rather than going out of its way to shock. Sure, its leads fit into the sacred female archetypes of aspirational modern romances—the Carrie, the Samantha, and the Charlotte (as recently pointed out in this discussion of the original drama)—but their roles aren’t so set in stone. The innocent girl can barely keep track of the number of men she’s kissed, after all, and the Samantha never once has a sex scene in the course of the show’s 16 episodes.

And even if it’s more traditional than the original (there are a lot more pat happy endings and a lot fewer hot make-out sessions), INR 2012 still manages to flout Kdrama conventions. It’s all here—Sex for the sake of sex! Friends with benefits! Cohabiting singles with nary a responsible adult in sight! Characters who are upwardly mobile, independent-minded, and free to live their own lives and make their own decisions! Scandalously, the female lead also steps outside the norm to be a successful career woman who isn’t defined by her job—she loves it and is good at it, but prioritizes it as part of her life, not her whole reason for being.

As part of their iconoclastic approach to the drama canon, each of the I Need Romances re-imagines a standard-issue cliché: the first turns a chaebol/poor girl love story on its ear, and the second finds a new way to explore the terminal disease plotline so beloved of Kdramas. While I whole-heartedly approved of the original’s controversial ending, I was less enthusiastic about the way the sequel came to a close—although the time jump helped, the final decision felt like a pity pick. I wish the show had either gone for the love triangle’s other angle, or found a more convincing way to take the heroine where it wanted her to go.

It’s the little details that sold me on this series, though, like the silent conversations the characters carry on using only facial expressions. (They’re helpfully translated in voiceover for the viewers.) When you’re close to someone it really does feel just like this, as if you could say all you need to say in a glance without the trouble of words. The freeze-frame still photos inserted into the action in this season are another example of an unusual technique that’s totally successful. Instead being jarring interruptions like they were in the original, they now feel like another storytelling tool—a way to make the characters’ internal lives external within the flow of the narrative.

In spite of being a bit less homey and appealingly naturalistic than the original, I Need Romance 2012 is still a charming, smoothly plotted exploration of love and friendship.

Random thoughts
• Did I mention that I’m obsessed with the theme song, Lasse Lindh’s “I Could Give You Love”?

• The dramas in this series have really managed to make the technique of voiceover their own. One of the few gripes I had about Dal Ja’s Spring was how hokey and dated the earnest voiceovers felt, but somehow INR manages to make them seem fresh. It’s partially that the voiceover tends to be inserted over edgy-looking freeze-frame stills instead of run over exterior shots, and partially that the delivery is crisp, not moony.

• Episode 1. Good gravy—I just understood an entire conversation in Korean! (So what if it consisted entirely of the words “Okay” and “Go”?)

• Episode 2. Oh, Korea. Can’t you save the date rape for episode 3, at least? And of course nobody is discussing it as such—the slogan “Obvious befuddlement and/or resistance means no” apparently never caught on in Asia.

• Episode 3. What the hell just happened with the person in the bear suit? And can it please happen in every episode for the rest of the drama? (And maybe all dramas, ever?) It’s like the Tragic Clown in The Sims, only in reverse. Traumatic scene? Hold on, Hugs the Bear will appear and comfort your favorite character! Random, and randomly wonderful.

• Episode 4. So it seems that the real common thread between these two dramas is actually a female lead who sabotages her own relationship. In the first season, she lets paranoia and suspicion take over her entire being when she suspects that her boyfriend cheated, blaming him long before he did anything to deserve it. In the second season, male characters keep asking what the girls want, but the female leads are to afraid to actually make their feelings clear. If I’ve learned anything in my time on this planet, it’s that the fastest way not to get what you want is not to ask for it.

Episode 7. Dear show: I think it’s love. Will you marry me? Sincerely, Amanda

—So, Mr. Second Lead. You work at Coffee “King,” do you? You’re no Choi Han Gyul, but I’ll give you points for trying.

—I bet this episode would have been a lot more amusing if I understood any of the references to Korean movies. Couldn’t the screenwriter just have made some jokes about Secret Garden, instead?

• Episode 8. Item 7 million on the list of things this show does just right? Dialogue. Not the cheesy Kdrama lovey kind, but the crisp and funny and smart kind. (Not that there’s anything wrong with cheese, or that INR 2012 doesn’t also bring its fair share of it to the table. It just has more to offer.) My favorite line from any Korean drama ever was is in this episode. The male lead said, mid-argument, “Your mind is there to hide things you don’t want to say out loud.” If only I were a little better at remembering that myself.

• Episode 14. I want a Korean Monopoly board! (Even if it’s called Blue Marble.) Also, what’s up with golden retrievers in Kdrama? Must they always come in luxuriantly furred pairs? Is this the same set that appeared in My Princess?

• Episode 15. Epic timing fail! I just finished episode 15…but episode 16 isn’t subbed anywhere yet. How can you leave me hanging like this, cruel world?!?

• Episode 16. I found it 97% subbed at Viki. (I’m so glad that half of that missing translation is in the final monologue. Really.) Why do I feel like the heart has been ripped from my chest, torn into itty-bitty pieces, and stomped on for 45 minutes? Oh right. Because it has.

You might also like
I Need Romance
The Woman Who Still Wants to Marry
My Sweet Seoul
Posted by Amanda at 9:30 AM