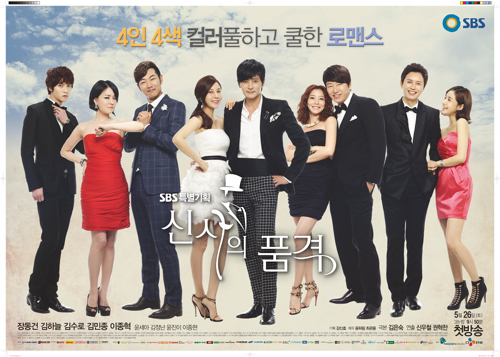 Grade: Incomplete/dropped
(I watched to episode 7 and then skipped to the last half of episode 20 for background noise while finishing this post)

What it’s about
After approximately 30 years of acting like teenagers, a quartet of middle-aged male best friends finally manage to grow up. (Or so I hear.)

First impression
As promised (threatened?), the first episode of this rom-com mostly involves adults acting like annoying teenagers. The female lead has potential, but come on—sure, you had a minor wardrobe malfunction, but let’s be honest here. That slip was a good two inches longer than any shorts you might wear (as you are, after all, a character in a Kdrama), so is it really such a big deal that you flashed it at some strangers? Word on the street is that this show improves with every passing episode, so I’m still hopeful that I’ll end up loving it.

Final verdict
Not the show for me. As I sometimes do, I decided to start fast-forwarding through the boring parts at about episode 7. When I realized I’d skipped through the first 45 minutes of the episode without finding a single scene I actually wanted to watch, it became clear that it was time to call it quits. The characters weren’t interesting enough to carry the decentralized plot, and the plot wasn’t compelling enough to make up for unlikable characters. Although this is not a show without its charms—the bromance is cute, and I really liked the soundtrack—life is just too short to watch twenty hours of people I don’t like doing things I don’t care about.

I hate you and your petty concerns.

• Episode 3. There are a surprising number of Kdrama filming techniques that have never really made it to America—including one that was used in this episode. The leads were having a conversation while standing on a beach and looking out over the ocean. In front of them was the water, and logic would dictate that behind them was an inland view of a road or parking lot. But rather than waste the pretty scenery, every shot of the couple showed the ocean in the background, even if it should have shown the inland parking lot. The director must have pointed his camera at the ocean and filmed the dialogue twice, once with the couple facing the camera, and once with them facing away from it. The two versions were then edited together, so when the actors were seen from behind, the ocean was in front of them. And when the actors were shown from the front, the ocean was behind them. This happened a few times in last year’s Padam Padam, too, including the amazing fireworks scene. In a way, it’s totally contrary to any attempt at naturalistic cinematography ... but in another way, it really does make the most of the backdrop.

—Like me, the male lead names his cars. I have a weird feeling, though, that he’s also the type to name other things. “Hong Gil Dong” much?

• Episode 4. This show is starting to win me over, but the appeal of the male lead is still an utter mystery. I know he’s supposedly the Korean George Clooney, but his deathly pallor, razor-sharp cheekbones, and shadowed eyes make him look like an extra from a particularly bleak Tim Burton movie. And even though he says he has a crush on the female lead, he acts like a total dick whenever they’re together—it feels more like he’s set out to torture her than romance her. When normal grownups think they like someone, they chat; when this guy thinks he likes someone, his first order of business is to completely alienate her. I sure hope AGD has something up its sleeve to explain this behavior—I’m no good at love, but even I can see that this isn’t a winning strategy.

•Episode 5. Jang Dong Gun, I would have thought that someone of your age and experience would know that there's more to acting than exaggerated blinking. Guess not, though.

•Episode 7. Did you know that some forms of Islam make ending a marriage as simple as saying “I divorce the” three times? Let’s see if it works with Kdrama: I divorce the, I divorce the, I divorce the. Guess what, Gentleman’s Dignity? It did work, which means it’s the end of the road for us. I can’t take one more episode of your unlikable characters, dull plot, and woman-hating tone. Thanks for the bromance, at least.

Protect the Boss, for the cute, realistically competative bromance
Posted by Amanda at 9:00 AM