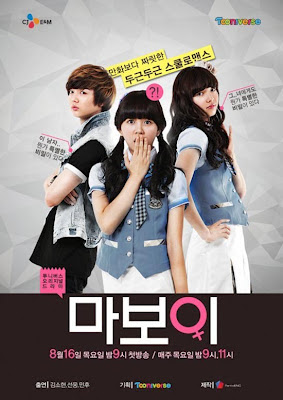 First impression
Cute, quirky, and briskly paced, this show isn’t at all what I expected from a network named “Tooniverse.” It’s not cartoony or exaggerated, just a nice little story about a boy who’s stuck pretending to be a girl while he waits for his big break as a dancer. It’s like Hannah Montana, if Hannah Montana had the added complication of being a boy.

Final verdict
A bite-sized treat that’s both sweet and endearing. All three of Ma Boy’s hour-long episodes are surprisingly satisfying and fun, and its short length ensures that there’s very little useless padding. This drama is worth watching, if only for its adorable characters and stellar young cast. (And if you’re torn up about how terribly the world treats Kim So Hyun in I Miss You, this is the perfect, sugar-coated antidote.)

Especially notable is the fact that Ma Boy’s gender-bender isn’t treated as the butt of the show’s jokes, unlike most other male-to-female cross dressers on TV. Instead, he’s just another kid trying to make it through high school unscathed.

Random thoughts
• Episode 1. Korean commercial alert!! Have I mentioned that I love it when the uploaders of cable dramas neglect to remove the commercials that originally aired with the show? This roast chicken number is particularly amusing, as it features what appears to be basic calisthenics and no chicken whatsoever. (I guess that’s why everybody is always eating roast chicken in the drama itself.)

You might also like
The holy triumvirate of cross-dressing dramas: Coffee Prince, Sungkyunkwan Scandal, and You’re Beautiful
Posted by Amanda at 9:00 AM