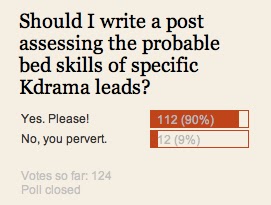 Big, Kang Kyung Joon: Once Gil Da Ran resolves some sticky questions (e.g., Is it illegal and/or cradle robbing if he’s currently inhabiting the body of an adult?), I’m sure he’d come through for her.

Boys over Flowers, Goo Joon Pyo: Easily frustrated and sometimes childish, it would be a rocky start. I’m sure things would take a turn for the better once he got some practical advice from his more experienced friends.


Coffee Prince, Choi Han Gyul: He loves Eun Chan for exactly who she is, and he’ll do anything for her. A good time will almost certainly be had by all.

Flower Boy Next Door, Enrique Geum: This show has taught Enrique that being slow and patient is the best way into a woman’s heart. Being a quick study, he’d eventually realize this applies to other body parts as well.

A Gentleman’s Dignity, Kim Do Jin: If you’re into bondage, he’s the man for you—his love for making girls powerless and uncomfortable probably carries over into his bedroom habits.

Heartstrings, Lee Shin: He’s pushy, domineering, and wants to control his female lead as if she were a child. Sorry, Lee Kyu Won—good thing Enrique Geum is in your future, huh?

I Do, I Do, Park Tae Kang: Young, eager, and grateful isn’t a bad combination in the bedroom, or anywhere else.

I Miss You, Han Jung Woo: Everything would be fine until he screamed your mother’s name. Then, not so much.

I Need Romance, Kim Sung Soo: Frank and candid about what he likes and what you might like. A great communicator often means great sex—too bad about that whole cheating thing.

I Need Romance, 2011, Yoon Suk Hyun: Prone to secret keeping and the silent treatment. What’s the fun in that?

King2Hearts, Prince Lee Jae Ha: He’d better be good, because the pressure to produce an heir and a spare would be pretty intense. Even shagging gets old if you do too much of it.

Ma Boy, Irene/Hyun Wo: What do women want? After pretending to be one for more than a year, he might just have an idea. You’d probably get tired of him wanting to wear your heels all the time, though.

Operation Proposal, Kang Baek Ho: Skip it. You’d be too busy worrying that his creepy dead dad was watching from the other side to enjoy yourself.

Padam Padam, Lee Gook Soo: In America we have something called the Mile High Club. He’s got the wings for it, among other things.

Pasta, Choi Hyung Wook: Demanding and bossy (think John Hamm in the beginning of Bridesmaids), but he could make you a killer spaghetti e olio afterward.

Playful Kiss, Baek Seung Jo: Selfish and hypercritical are not the key personality traits of a great lover. (On the other hand, the show establishes that he’s good at everything he does without putting in any effort whatsoever...so maybe it wouldn’t be so bad after all.)

Secret Garden, Kim Joo Won: Once again, practice would win the day. We know what he was really doing with himself every off-screen second he was in her body.

Queen In-hyun’s Man, Kim Bong Do: After he bones up on the subject at the local library, you’ll be good to go with this dreamy Joseon scholar.

The Snow Queen, Han Tae Woong: There’s at least one person will who will never know, because she decided to die a virgin instead. Sigh.

Spring Waltz, Yoon Jae Ha: Pianists know what to do with their hands, right?

Spring Waltz, Philip: He looks so great, it may not even matter if he’s any good.

Sungkyunkwan Scandal, Lee Sun Joon: After reading all those dirty books and spending episode after episode staring at her lips, we know where things would start off. I suspect this also means they’d end up well, though.

Sungkyunkwan Scandal, Moon Jae Shin: The night of your life, if you could ever pry him away from Goo Yong Ha.

Sungkyunkwan Scandal, Goo Yong Ha: The night of your life, if you could ever him away from Moon Jae Shin.

The World That They Live In, Jeong Ji Oh: He’d want to tape it, and that shit always ends up on the Internet.
Posted by Amanda at 9:00 AM