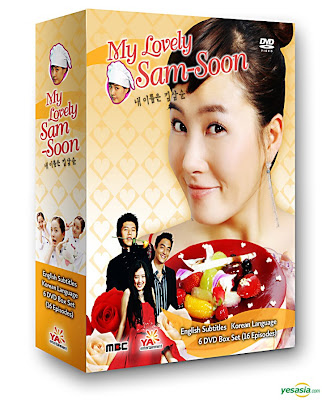 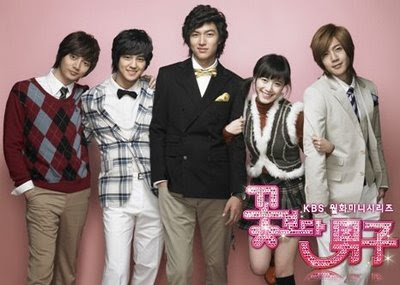 August 2011—The hook, line, and sinker drama. I have Netflix to blame for my current state of obsession. After deciding that I had been wasting money on a membership I hardly ever used, I vowed to watch something they carried before the new television season began in America. I was clearly defenseless against Boys over Flowers. In spite of its flaws, it checked all the boxes: It was a youth-oriented show featuring handsome young men, a scrappy heroine, and the most epic of Cinderella plot lines. I mainlined episode after episode, breathless with anticipation: would Jan Di choose nasty Jun Pyo or thoughtful, supportive Ji Hoo? In retrospect, it’s hard to believe that I was ever innocent enough to believe this love triangle’s resolution wasn’t foreordained. But the most important thing I learned from BoF was that I would never run out of romantic comedies, if only I looked beyond the borders of America. Girl-centered television series are relatively rare here, so it’s possible to have seen everything on offer at any given time. But the sheer volume of series produced every year in Korea ensures an almost constant supply of new shows, many of which are just my type. 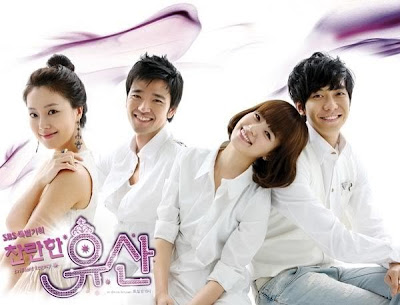 September 2011—Drama in the wild. After burning through Netflix’s then-scant Kdrama offerings, I found the dearly departed Drama Crazy and Mysoju. (If you had told me then that both would be gone forever within two years, I would have laughed—at that point, they seemed as eternal and inexorable as Amazon.) With their impossibly encyclopedic offerings, these sites made me realize just how vast the Kdrama empire really was: I could never possibly run out of new shows to watch. And the first drama I watched on Mysoju was the only thing could have made me happier about this: Shining Inheritance, which introduced me to the genre of Korean melodrama. As disorienting it was at first to keep track of all the characters and plotlines, watching Shining Inheritance felt like coming home. It was like one of the Lifetime original movies I grew up watching—one with over-the-top backstabbing, family intrigue, and a girl doing everything she could to salvage a life gone horribly wrong. In the U.S., programming that revolves around a female leads is usually ghettoized on the outer reaches of cable. But in Korea? It’s prime time viewing. 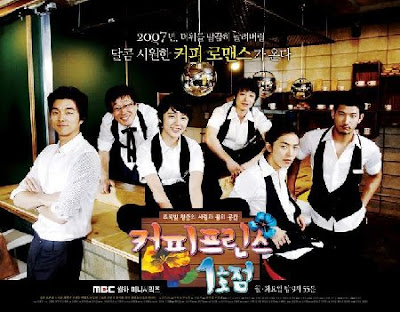 October 2011—The soul mate. It seems that most everyone has that one drama, the one that they could happily watch on an infinite loop. Mine is a little show called Coffee Prince. (Maybe you’ve heard of it?) The only bad thing about Coffee Prince is that it’s one of a kind—funny and serious, sweet and thought-provoking, silly and genuine. Even though I’ve seen tens (hundreds?) of dramas since I picked Coffee Prince at random from of Drama Crazy’s list of popular shows, none of them have made me smile as spontaneously, squee as intensely, or want to come back to them quite as often. Coffee Prince also inspired my very first drama-related comment on the Internet: I was so woozy with joy by the end of the final episode that I posted about how much I loved Sweeper’s bath in Drama Crazy’s comments.

November 2011—No, this is the song of my people. Dramafever appeared in my life at about this point, like a playground crack dealer with the finest, cheapest supply on the block. Comcast probably misses me, but shortly after I signed up for a year of Dramafever I dropped my American cable package—possibly forever. 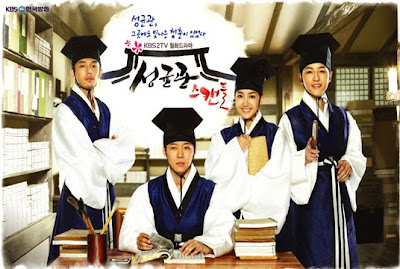 November 2011—The first sageuk. I thought I’d never watch historical Kdramas. The clothes seemed too crazy—men in dresses! mesh pilgrim hats! Women with deely bobbers woven into their hair!—and the episode counts were too high. Hungry for more cross-dressing shenanigans, though, I found the perfect introduction to the breed: Sungkyunkwan Scandal. In twenty (not so) short episodes, it made me fall in love with Joseon scholars, hanboks, and its cast of up-and-coming young actors. Its status as a fusion show allowed SKKS to explore gender and economic inequities in anachronistic ways (and also invited memorable scenes with elevators, couples’ rings, and primitive telegraphs). Nowadays the only thing that’s holding me back from becoming a complete sageuk hound is the extreme length of most historical Kdramas—any show longer than about 25 episodes feels like an unthinkable commitment, and sageuks are often much, much longer. 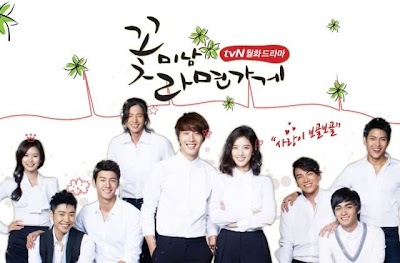 December 2011—Off the deep end. Like many Americans, I grew up eating ramen. But until I started watching Korean drama, I never ate it the right way (mixed an egg and lots of green onion) or in the proper position (off a saucepan lid while sitting on my living room floor). But one snowy afternoon during winter break when I was midway through Flower Boy Ramyun Shop, I broke down and gave it a try. It was a big day for me all around: it was also the first time I posted on the Friday open thread at Dramabeans, which led me to realize just how much I liked writing about Korean drama, which led me to start this blog.

December 2011—The birth of Outside Seoul. During my boring two-week holiday vacation, I had (perhaps too much) time to think about dramas. I’ve had an internet presence since the late 90s, and I began to think about creating a new spot to vent about my Kdrama obsession. It was high time: people in my life were starting to flinch reflexively whenever I said a word that started with the letter K, but I still could barely contain all the random fun facts I had picked up during my excursions in dramaland. It must have been like hanging out with an older, less cute version of Hermione Ganger: “It’s raining but sunny out? That’s fox rain.” “In Korea, it’s a compliment to tell someone they have a small face.” “You should never give shoes to someone you love, because they’ll walk away from you in them.” The one stumbling block to starting this blog was my acute awareness that I had nothing much to offer—I have no particular interest in film criticism, no knowledge of Korean language or culture, and no kimchi-making grandma. But if people wrote about only what they knew, the Internet would be a pretty quiet place. So I decided that maybe being utterly clueless had merits in itself, and Outside Seoul was born.

January 2012—The first inside joke. For the first six months or so, watching Kdrama was like wandering through Willy Wonka’s chocolate factory without a map. Everywhere I looked there were marvels and wonders, but I understood none of them. As I watched more and more dramas, though, my K-ent vocabulary grew and I started to see things for what they were: Sam Dong’s dream sequence in Dream High played off the epically effective scene introducing the F4 in Boys over Flowers. (Say what you will about Korean drama, but I can’t think of the last time any U.S. show had a scene as iconic as the “Almost Paradise” intro.) That first time I understood an inside joke was like a baby’s first steps—inevitably, it was followed by more of the same. When Ha Ji Won squealed “Binny!” at the sight of a Hyun Bin poster in King 2 Hearts, the scene was more than a comment about cute Korean actors—it was a nod to the spotlight she had shared with him in Secret Garden. 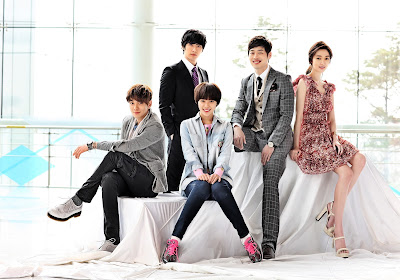 February, 2012—The first drama drop. Early on in my drama career, it never even occurred to me that it was possible to stop watching a show after you started it. I even barreled through the entirety of Secret Garden in spite hating almost every minute of it. But then came Can You Hear My Heart, a series completely ruined by its profoundly annoying lead couple: Kim Jae Won, always uncannily pasty and wan, was so “milky” looking he actually creeped me out. And vacant-eyed, empty headed Hwang Jung-eum capered around like a dim-bulb cheerleader on speed. In combination with the drama’s bloated, pointless script they pushed me over the edge—I dropped the show by episode 14 and haven’t looked back since. These days I’ve realized that it’s not worth my time to watch shows I don’t click with. (Sorry, I Love Tae Ri.) 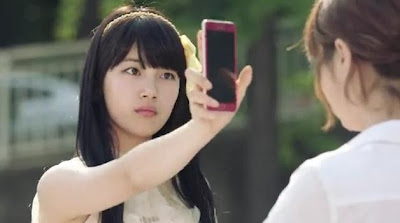 Ongoing—The extracurricular activities. To paraphrase a much-loved meme: One does not simply watch Korean drama. The food is too yummy looking, the places are too gorgeous, and the beauty products are too enticing. I’ve bought detoxifying face masks, ramyun, and even a cell phone based almost exclusively on my exposure to them on Korean television shows. (Learning how to use the Samsung Galaxy has been a snap. Thanks to all its product placement, I knew how to do everything before I even picked it up the first time.) Although an actual trip to Korea is probably never going to fit into my budget, I’ve read Lonely Planet’s guide to Seoul cover to cover, and my shelf of books to read contains a few volumes of Korean folk tales. (Unfortunately, I haven’t found much Korean fiction in translation.) I think the South Korean government is on to something with their campaign for “soft power”—global power gained through the cultural cachet earned by Kpop and Kdrama.

Two years is actually an incredibly long time to be obsessed with something. Will I be around for two more? I can’t say for sure—but it is just long enough for Song Joong Ki to finish his tour of duty. That’s a pretty powerful incentive.