In 10 Things I Hate About You, my favorite teen movie of all time, one character looks at another with a perplexed expression on her face and asks: “I know you can be overwhelmed and you can be underwhelmed, but can you ever be just whelmed?”

After watching many of the 2012 Kdramas I was looking forward to, I can report that it is indeed possible to be whelmed. None of them have been nightmarishly bad, but they also haven’t been daydreamily good—mostly they’re just whelmingly meh. I’m hopeful that things will turn around as we gear up for the fall season, though, and am already looking forward to the new crop of shows due to start airing after the Olympics.

Without further ado, here are brief notes about four upcoming dramas that I’m eager to watch. (And mentions of two that I’m not really excited about, but may eventually get around to if the reports are good.)

Faith (24 episodes; begins airing 8/13). After reading Dramabeans’ deeply amusing recaps of this summer’s god-awful Timeslip Dr. Jin, I decided to scratch it off my list of things to watch altogether and instead pin my hopes on this similarly themed fusion sageuk starring the lovely Lee Min Ho. The recent rash of time-travel dramas have mostly focused on people moving forward in time from the Joseon era, but this one takes the opposite approach: a modern-day plastic surgeon is kidnapped by a warrior from the Goryeo Dynasty and brought back in time to save a injured princess. (Or so says DramaWiki).

This spring’s rom-com time-travel capers Rooftop Prince and Queen In-hyun’s Man were fun to watch, but I’m hoping that Faith’s take on the subject matter will be grittier and more concerned with the realities of adapting to life in the past. I want it to be from the Outlander school of warts-and-all, OMG-is-that-a-bedbug? time travel, not the we-wear-Nikes-in-the-Old-West of Back to the Future III. It’s probably too much to hope for social commentary—I imagine the full extent of the female lead’s adjustment to the past will be getting used to wearing flats—but inherent in the plot is the potential for fascinating discussion about how Korean society has changed in the modern world, especially because it’s an independent woman doing the time travel. Will she be expected to show deference to men in a way she wouldn’t today? Will her talents be ignored by everyone but her kidnapper, because she’s just a girl? Will she have to get used to being carried around in one of those claustrophobic little boxes sageuk women are always seen in?

I’ll also be interested to see what the script does with the dichotomy between its romantic leads—based on their early descriptions, he’s a laid-back warrior prone to taking naps while she’s a type-A overachiever who decided to specialize in plastic surgery after realizing the life-or-death stakes of being a doctor weren’t for her. (Where have I met that character before? Oh, right 2004’s dreadful Lovers.) It could be fun if the two just had contrasting outlooks on life, but I suspect that the show’s primary journey will be finding a way for them to live up to they potential they’ve been denying by overcoming their fears of failure. 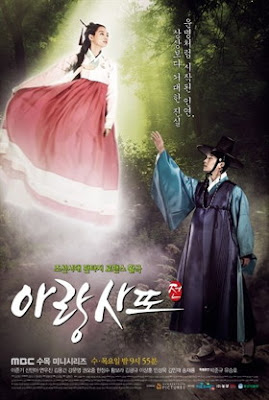 Arang and the Magistrate (20 episodes, beings airing 8/15). Another fusion sageuk with supernatural elements, this drama tells the story of a ghost’s attempt to solve her own murder with the help of the handsome local magistrate. Naturally, forbidden love is the result (yay!), but depending on the show’s approach it’s hard to imagine a happy ending for a couple separated by death (boo!). The lead actors are about as charming as they come—Shin Min A from My Girlfriend Is a Gumiho and Time between Dog and Wolf’s Lee Joon Ki, fresh out of the army—and I look forward to seeing how Kdrama handles this ghostly plotline. In the West, ghosts are just as likely to be friendly as evil, but from what I’ve seen the Asian understanding of them leans more toward the terrifying. (Or maybe I’ve been watching too many Japanese horror movies?) I can’t imagine this show actually being scary, but the promotional materials do give it a Sixth Sense vibe, with the male lead having seen ghosts throughout his life.

Judging by blogger buzz, Arang and the Magistrate is in a dead (ahem) heat with Faith for the title of drama of the season. As long as Dramafever cooperates, I’ve already decided to watch it as it airs, rather than waiting for the whole show to be subbed before starting it. 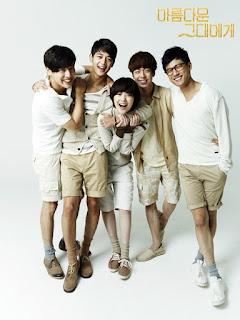 To the Beautiful You (16 episodes, beings airing 8/15). Based on the Japanese maga/drama Hana Kimi, this might just be the perfect show for me: A girl pretends to be a boy to attend her hero’s school, all in hopes of getting close to him. Unfortunately, though, the plot is rife with things that might make me loathe it: By all accounts, it’s more of a comedy than a drama, and I love angst more than yucks when it comes to Korean television. And then there’s the sports angle—the male lead is a track and field athlete who specializes in the high jump; the story apparently revolves around an injury that prevents him from participating. It should go without saying that I have yet to see a sports drama that didn’t make me want to scratch my own eyes out with a golf tee rather than watching past episode 2. Another red flag? The Wikipedia entry about Hana Kimi calls the female lead a “ditz.” This sounds like cross-dressing in the style of You’re Beautiful’s idiot Go Mi Nyeo, rather than the smart, capable girls in Coffee Prince and Sungkyunkwan Scandal. Why is it, then, that I can still barely wait to watch this show? Must be the cute dog that keeps popping up in early stills. (Right? Because it would be wrong of me to perv over boys who are half my age.) 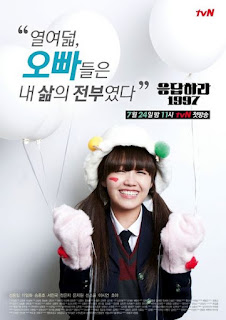 Answer Me, 1997 (16 half-hour episodes, airing now). Although I was in college in 1997, I’m not entirely sure I could have found South Korea on a map. But even if the pop-culture nostalgia of this sitcom set in 1997 will be lost on me, coming-of-age school shows are pretty much my catnip. Tragically, I don’t know that anyone is subbing this in English, let alone posting it steaming, so it’s shaping up to be another Wife’s Credentials—a Kdrama Holy Grail universally acknowledged as good, but inaccessible to suckers like me who don’t speak Korean. Dramabeans is recapping, though, so here’s hoping that will inspire someone to translate it.

[Update: Answer Me, 1997 has been added to Dramafever's coming-soon list, which is about a mile long and full of awesomeness. Hooray!] 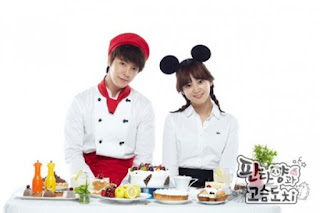 In spite of a name that sounds like a sexual position highlighted in last month’s Cosmo, Panda and the Hedgehog is a romantic comedy that seems to be a younger version of Pasta. Not a bad thing, but I’m not holding my breath. Begins airing August 18.

Haeundae Lovers deals with a prosecutor who loses his memory and ends up working with the gangsters he’s been trying to convict. Inevitably, he falls in love with the head gangster’s daughter. This plot was great—when it was used in 2007’s Time between Dog and Wolf. I guess this romance-centric version of the story might be interesting. Maybe? Begins airing August 13. (Side note: For an amusing take on the inevitability of some traditional plotlines, I highly recommend Mercedes Lackey’s Five Hundred Kingdoms books.)
Posted by Amanda at 9:00 AM

Email ThisBlogThis!Share to TwitterShare to FacebookShare to Pinterest
Labels: Answer Me 1997, Arang and the Magistrate, Coming Soon, Faith, To the Beautiful You