Drama Short: I Do, I Do Review 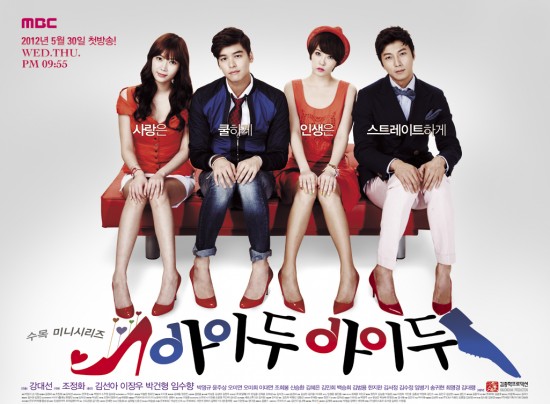 What it’s about
A high-powered shoe designer discovers she’s pregnant after a one-night-stand with a younger man, who just happens to be a professional knock-off artist specializing in luxury brand shoes.

First impression
This middling rom-com is part Baby-faced Beauty and part Me Too, Flower. Talk about unholy combinations—why didn’t they just go ahead and throw some Secret Garden in there to ensure that I’d really hate it? I’m even immune to its eye candy: the male lead isn’t my type, and I loathe high heels. (In fact, I quite happily buy most of my shoes at a store called Farm Way.)

Final verdict
Although as mediocre as they come, I Do, I Do is not completely without charm: it has its moments of sweetness and humor, and the cast is reasonably likeable. Having said that, though, this drama is also flawed in a way weirdly similar to its classmate Big. Rather than building shows around the elements that made their plots unique and compelling—body swapping in one, and a single, career-first woman who suddenly finds herself pregnant in the other—these shows chose to spotlight what made them average. For Big, the stumbling block was writers who overestimated the appeal of its central romance and decided to chuck all of the other story elements in favor of it. In the case of I Do, I Do, the true heart of the series was obscured until the very end by time wasted on repetitive office politics. Both shows also managed to be structurally unsatisfying in pretty much every way possible—their overarching plots failed to sustain momentum, and on an episode-by-episode basis they didn’t even bother trying to achieve any sort of narrative tension. Big and I Do, I Do also closed with events that, from a storytelling perspective, should probably have happened by about episode 8. (But you’ve got to hand it to I Do, I Do—at least it didn’t have the second male lead playing the baby in the final scene.)

If only this show had embraced its true premise rather than watering it down with standard Kdrama workplace shenanigans, it might have been the moving story of an independent woman rising to the challenges of unexpected motherhood. As it is, I Do, I Do is an empty exercise in form over function that has neither a heart nor a soul.

On the bright side, if you’ve recently been concussed and are in the mood for an easy-to-watch drama that asks nothing of you (but also gives nothing in return), you could probably do worse than watching I Do, I Do. Like watching Big.
Random thoughts
• I’ll give this show one thing: it’s an interesting 180 on traditional Kdrama gender roles. Instead of a prickly male lead who needs to be convinced to love someone, Park Tae Kang is a goofy, big-hearted underdog who desperately wants to succeed—a hardworking drama girl who just happens to be a boy. And Kim Sun Ah, wonderfully, is totally cast as the irascible Jun-Pyo type, only without an F4 to back her up.

• Episode 1. I’m all for no-nonsense career girls, but you know what would have been really awesome? If Kim Sun Ah’s character had owned her sexuality and gotten out of that bed totally naked—and totally unembarrassed. Instead, welcome to the standard “But I’m so shy!” moment of post-coital Kdrama anti-bliss.

• Episode 7. So at this point it has become clear that the creators of this show missed a key Kdrama commandment: Thou shalt not combine a dull, go-nowhere plot and a lead couple with zero chemistry. I Do, I Do is the worst of both worlds: all the boring office politics of a workplace drama with none of the episodic rewards of seeing our hero learn and grow, and all of the wangst [wank + angst = wangst] of a romance, with none of the cute lovey parts. Why am I watching again?