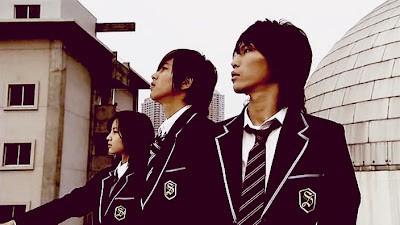 What it’s about
Two high school boys—one the class clown and the other the school heartthrob—make a project out of winning popularity for the new girl, a strange, shy loner.

First impression
I decided to give this show a try on the recommendation of a Kdrama friend, and really like it as of episode 1. I was turned off Japanese drama early on in my Asian TV obsession after watching some of the freaky Yamato nadeshiko shichi henge. I didn’t understand that show at all, but now I know why: it’s a miles-over-the-top spoof of Nobuta wo produce. Duh.

Final verdict
Television doesn’t get more heartwarming than this show: it’s a tale of an unlikely friendship and a poignant reminder that the perils of adolescence aren’t so different, no matter what country you’re from. Tinged with a dark hint of magical realism, Nobuta wo produce’s 10 forty-five minute episodes were over far too quickly—and made me realize just how bloated and listless Kdrama plotting can be. Every episode stands refreshingly on its own as a fully contained story, but also contributes to the larger narrative arc of the three central students journeying to adulthood. With its slice-of-life vibe, quirky cast of characters, and zippy pacing, this is a drama that pulls you fully into its world.

Random thoughts
• Watching a Japanese drama feels like traveling to a foreign country for the first time: Who are these peculiar people and what is this crazy language they’re speaking? Funny to think Kdramas once felt that way, too—especially now that I’ve internalized Korean culture to such an extent it’s my fellow Americans who leave me confused.

• It might be a touch early in my relationship with JDramas for sweeping generalization, but far be it from me to think I actually need to know about something before I can write about it. So I’ll just come out and say it: To me, Korean drama is 100% fairly dust. Japanese drama, on the other hand, is 30% fairy dust, 60% Dostoyevsky’s Notes from Underground, and 10% unicorn farts. A strange, shocking mixture indeed.

• Episode 1. I had nightmares about those damn monkey paws last night, all thanks to W. W. Jacobs’ terrifying 1902 short story of the same name. Eek! Is this show going to scare me?

• Episode 4. I’m not a very fast runner, but I’d like to be this truth guy. Imagine what fascinating secrets you’d hear if you made a habit of going up to strangers and demanding that they tell you the truth? (Assuming they actually did it instead of punching you in the face.)

• Episode 9. Call me crazy, but I love the little informative notes Japanese-language subbers like to include in their dramas. They make sure their viewers come away from an episode not only having enjoyed the show, but also truly appreciating the finer points of the script. Without them, English speakers like me would never have appreciated Akira’s clever (but goofy stupid) wordplay throughout this drama.

• Episode 10. And the award for the most delightful moment of the show goes to: “Does anyone have a saw?” Nobuta asks at random as she and her two friends hang out after school. “Of course I don’t,” the first friend replies ruefully (and understandably, as the request is both inexplicable and utterly unexpected). The second friend pipes up, pulling a small handsaw out of his pocket. “Actually, I do,” he says. “I keep a saw with me just for times like this.” Seriously? Could you be any crazier, drama? Or more wonderful?

Watch it
Drama Crazy (Psst...some genius has posted full episodes on YouTube that you can access at the bottom of the link list, next to the name JKShows)
My Soju

Boys over Flowers, for its strong friendships and the gritty, real-world atmosphere of Jan Di’s life outside of Shin Hwa High